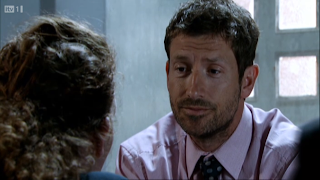 (This post was originally posted by David on the Coronation Street Blog in July 2011.)


What a pickle poor Fiz found herself in last night!
Although the storyline involving Fiz’s post-Stape predicament hasn’t been one of my favourites, I have enjoyed the way the legal side of it has played out.
I’ve enjoyed seeing DC Redfearn coming in and out over the past few weeks as his investigation has continued. Although he has very little evidence, the odds are stacked against Fiz and he has managed to build quite the believable (if mostly based on speculation as well as Fiz doing herself no favours in babbling on and on about John) case against her.

And although women behind bars is nothing new to Corrie, last time we saw one of the street’s residents banged up for a long period of time was the ridiculous storyline where Gail found herself suspected of murdering Joe which was poorly played out so I’m hoping this time around the storyline will be a bit more bearable.  That said, I’m not sure I like the idea of Fiz being at the forefront of the soap again. How much more of her crying about Hope can we be expected to put up with?
Posted by Tvor at 13:37