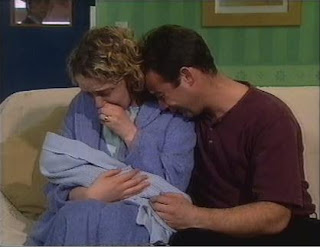 Sad that I am, I still get a little thrill seeing my name (or, in this case, my online nickname) in print in the media.

This week on Coronation Street, as we all know, the character of Kevin Webster remarked that "It must be hard to bury a child". Social media went up in flames as long time fans gave Corrie a virtual smackdown over the mistake. Kevin Webster lost an infant son 15 years ago *this week*.  Had Kevin forgotten? Clearly the writers and producer did. They're supposed to have an on-staff archivist that checks things like that but in recent years they've been woefully slack and the fans pick up stuff like this all the time.

The producer, Stuart Blackburn, spoke to one of the tabloids yesterday and apologised for the mistake. I can't see the article because it's in the Sun and you have to have a subscription and...it's The Sun. Why would I?

However, other media have picked it up and repeated it and in one that I saw, my online nickname jumped off the screen at the end. I remember the quote, I posted it as a comment on the initial post about the issue here.

This didn't use the full comment, though. I suppose it wasn't too flattering to use it all!


(Happy Birthday to Bethany, by the way. I think her family has forgotten. It happened the same week.)