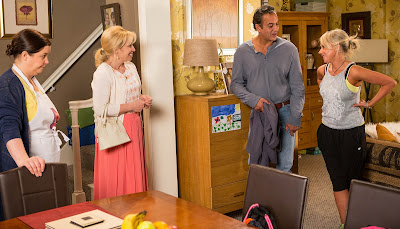 Dev's ladyfriend Talisa turned up on the cobbles this week.

Clearly rattled by the appearance of yet another woman in Dev's life, Julie gets jealous.

On Monday night we saw Julie taking Talisa to task when she quizzes her about how long she plans to stick around. Julie then suggests it's time for Talisa to get a job and suggests she teach yoga at the community centre.

Talisa will be played by actress Samantha Power, who has appeared in Coronation Street before.

She turned up in 1995 as Emma Baxter, a potential purchaser of No. 9 from the Duckworths.

Her role in Coronation Street was one of her first parts but she has since built up a strong CV including A Prince Among Men, Peak Practice, City Central, Where the Heart Is, a regular role in Little Britain and The Cup, Waterloo Road and several parts in Doctors.

Let's just hope Talisa isn't another one to add to the T for Trouble blog post!