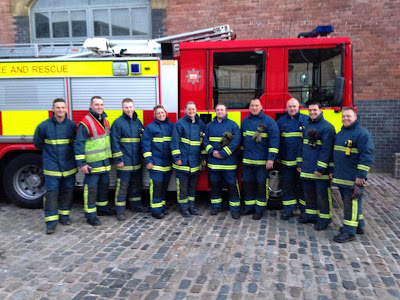 It’s all heating up at Coronation Street as Victoria Court goes up in flames tonight.

And it's been burned to the ground by the same fella who set fire to the Rovers Return.

Working behind the scenes to ensure filming of the fire runs both smoothly and safely is Matt Owens and his team from Rapid Fire Cover who are Television and Event Fire Safety Specialists.

Matt has kindly agreed to an interview with us here on the Coronation Street Blog to talk us through what it’s like to set Victoria Court on fire and burn it to the ground!


Me: By ‘eck, that was a big fire! It was so big it made the headlines in the press when it was filmed as people were ringing 999 to report a real fire on the set.  Did it get out of hand or was it always meant to be such an inferno?

Matt: The fire was never out of hand and it was actually designed to be on such a large scale. The fire service were aware of what we were doing as they had been briefed prior to the stunt, but due to a 999 call from a concerned Corrie Fan, they had to come and have a look. Due to the professionalism of our crew and the Real SFX crew, there was never any foreseeable risk to cast or crew. We had assessed all aspects of the stunt and strategically positioned our firefighters on all floors, ready to extinguish the fire upon cut. 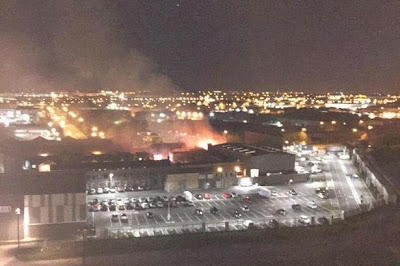 Me: Rapid Fire Cover are no strangers to Coronation Street – you did the fire for the Rovers Return too! How was this fire different to work on?

Matt: Victoria Court is a completely different building to the Rovers, but the hazards and risks to the cast and crew are the same. The exterior of Victoria Court  is a building consisting of 3 floors. We had firefighters on each floor, inside and out. The interior shots were inside a warehouse, where the walls could be removed to allow for ventilation and to enable us to gain access quickly.

Me: When you set fire to the Rovers Return that was on the old set. Where there any difficulties on working on the new set or was it a bit easier, being bigger?

Matt: This was our first time filming on the new set and there were no difficulties as such, if anything it made it easier to manoeuvre our two fire appliances on set. It was a very strange feeling though as we were used to being at the Quay Street set, you feel like you know where you are walking down the street, but when you get to the end, you are in a completely different place!

Me: Is there anything you can tell us about the fire from a technical point of view?

Matt: As for every fire cover job we do, we will go and recce the sets and write a risk assessment which covers all of the sequences and locations involved.  On the bigger nights we had 2 fire appliances, a fire supervisor and 10 firefighters on standby. Unless the sequence has gone wrong, we will wait until the director cuts. We will then extinguish the fires using a mixture of co2 and water, which can pose its own risks. Rapid Fire only employ serving and experienced firefighters and have the newest available vehicles and kit around, this is something we pride ourselves on.

Real SFX provided the special effects, they had a team of 6 who were responsible for igniting the fires and setting up the explosives. We work with these guys regularly and these guys know what they are doing. There were around 30 gas feeds into the sets which are all independently controlled to set fire levels to exactly what the director wants.

Every body on the crew, including the director, have to wear fire proof clothing. All of the artistes clothes had to be fire proofed as well.

Me: Did you have to give any of the actors or cast and crew members special fire training on this stunt?

The Watch manager, who is in the white helmet, is an actor called John Burton and the Fire investigation officer is played by Simon Smithies, both of these guys played the same roles on the Rovers Fire, they are the crème de la crème of Weatherfield Fire and Rescue service! Both actors are really friendly guys, we gave them some input on what their roles would involve and answered any questions they had.

Me: Do any of the cast members get scared filming fire scenes or do they never have anything to worry about being looked after by your crew?

Matt: I'd say one cast member was a little nervous, but we won't mention his name! We are taking people out of their comfort zone and putting them in a situation which in normal circumstances, you would run the other way! The temperatures inside the sets were extremely hot, which was uncomfortable for the artistes. We reassure them and explain what is going on and that we are there to look after them. They are also advised of exits and signals for if they are in distress. If they were to signal, they would be removed from the risk area immediately. Our firefighters are never normally more than a few feet from artistes either. St John's ambulance are always on standby so we can get people into immediate medical care if required.

Me: Did you use any of your own people on screen on this fire?

Matt: All of the Firefighters you see on screen are supplied by Rapid Fire, they are all professional firefighters who serve with various fire services. We also supplied a four legged fella called Charlie, he is deployed to fire related incidents and is trained in the detection of fuels and accelerants, which will assist in fire investigation.

Me: What's been the best things about working on Coronation Street again - and did you get star struck this time?

Matt: The best thing was working with the cast and crew, it is always a pleasure to work at Coronation Street and catch up with friends we have there. Its very humbling to think that they trust us with the safety of their cast and crew on sequences that have the potential to go very wrong! It is also a privilege to be asked to be involved in what is the street's biggest ever fire.

The worst parts were the night shoots, which I don't think anyone enjoys, starting at 7pm and finishing at 6am. I didn't get the chance to work with my good friend Antony Cotton either, as he was busy filming Steve and Michelle's wedding. He is a born entertainer and when we have worked together previously, he's always kept us amused and stocked up with sweets!

Matt: I think the viewers are in for some great television, it has already been tipped as the biggest fire the street has ever seen. If you have any questions or would like to get in touch to let us know your thoughts, our Twitter is @RapidFireCover