Have we seen the last of Jenny Bradley? 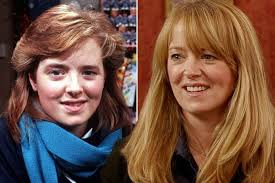 Sally Ann has been on Corrie, for the second time, as Jenny for the last five months - and she was carted off by the cops last night.  Is this the end of Jenny Bradley? I do hope not.

Sally Ann says that one of the best things about being back in Coronation Street has been spending time with Barbara Knox (Rita), Michael Le Vell (Kevin) and getting to know Brooke (Sophie).


In the video interview she gave nothing away regarding her storyline, her future, or whether this will be the last we see of Jenny Bradley.

And further to that... 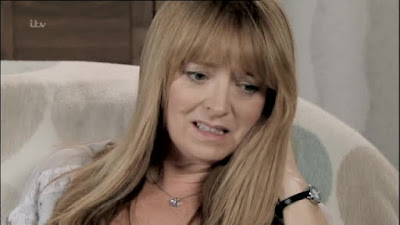 Further to our post the other day on whether Jenny Bradley will be back, there's an interview in the Mirror today with Sally Ann Matthews on the social media reaction to Jenny's actions and she also hints that we may not have seen the end of Jenny Bradley.

The reaction on social media has been wide and varied ranging from praise to death threats and wishes throughout her storyline. It doesn't seem to have intimtidated Sally Ann, who appreciates all the feedback. She has this to say about the negative reactions:

"Basically people thought Jenny was weird and then they blamed her for Maddie’s death. But the episode when I slapped Maria Connor was when it all really kicked off on Twitter.

There were some pretty dramatic reactions. When you read them one after another it’s quite overwhelming – people sitting on sofas in the comfort of their own home sending out the vilest things.

It is so weird – these people hate you because you are playing a horrible character."

She points out this happens more often with soap characters where regular drama baddies are hated but people are more aware they are just actors playing a part.  She is overwhelmed by all the positive feedback, too. When she was in the show 22 years ago, all that happened when someone didn't like you was that you got shouted at in public but now the feedback is immediate.

On Jenny's future, she says:

“I know there are stories for Jenny. I don’t what they are and I don’t know when they will be, but you haven’t necessarily seen the last of Jenny Bradley.”

“There’s definitely scope for future stories… history and relationships which not been resolved or explored."

“I think there is a lot of potential for Jenny – which is about as much as I can say about it.”


But will Jenny be back? Sally Ann isn't say for sure and, reading between the lines, it *could* be wishful thinking but then again, maybe she knows something we don't? I really hope we do see Jenny again.