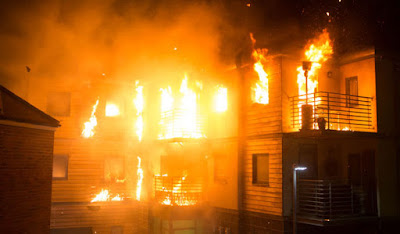 (This post was originally posted by Graeme N on the Coronation Street Blog in May 2015.)

I freely admit I fell out of love with Corrie. It's been a bumpy ride since the wonderful, emotional, beautifully written final journey for our Hayley early last year. I'm not going to write again about why I switched off as it's pretty obvious - too many characters, too many characters I don't like, too many storylines that either go nowhere or go on too long. Basically the heart of Corrie just wasn't there for me any more.

I was planning to tune in one final time for the episodes that will broadcast Deirdre's exit storyline. If I know Corrie they will raise the bar and pull out all the stops for this one. They owe it to the fantastic Anne Kirkbride to do so and they know it.

Anyway, I gave in and watched Fire Week. First of all I completely disagree with Corrie being used to support ratings for Britain's Got Talent. I've never watched BGT and I never intend to watch it either. Corrie shouldn't be used by anyone for anything. It's flipping Coronation Street for goodness sake. It's stands alone! I also don't like Corrie popping up at random times. 9pm?! Spare me! Corrie belongs at 7.30pm and that's that! 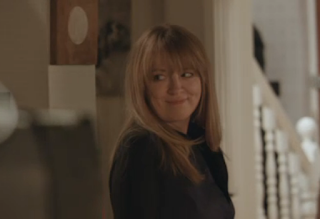 First of all, the positives. Sally Ann Matthews is an absolute star. It was a brilliant move to bring the legendary Jenny Bradley back to our screens and Sally Ann has put in some fantastic performances. I had hoped Jenny would be back long term but after this storyline peaks I don't see that being likely, which is a huge shame. I'm hoping that despite the drama, kidnap plots, roof-top dangling and dodgy wigs, we will get to the root of why Jenny has gone bonkers. Some sensitive scripts will do Sally Ann justice. A few more mentions of her nasty daddy and some more scenes with Barbara Knox would be special too.

The other actress who stands out for me is Beverley Callard as Liz. Poor Liz has been put through the wringer by slimey Tony and toxic Tracy this week. I've loved Beverley's gutsy performances - putting Steve's happiness before her own, helping to rescue Amy and destroying most of the Rovers back room! Lovely stuff. Liz is no saint though - Des Barnes' brother or Jim's physiotherapist anyone? - but I'm sure this storyline has got the audience coming down firmly on Liz's side. Bravo Bev! 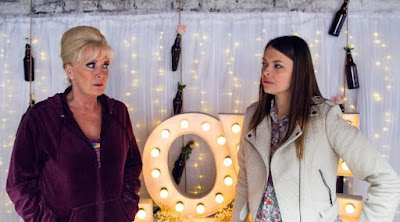 As for the fire itself? Coronation Street must be the most highly flammable street in Manchester. How many fires have we had of late? The Bistro, The Rovers, the faktry, number 13, Peter Barlow's flat, the cab office flat...the list goes on. Surely it's time for something else? The special effects were terrific and the whole thing was very dramatic if a tad slow and implausible. The rescue of Amy dragged on for decades. There were also strange aspects. For a modern block of flats the anti-fire measures (smoke alarms/sprinklers) seemed pretty pathetic or completely absent. However if it means we get rid of the useless Victoria Court then I'm not really complaining.

As always it looks like everyone is going to turn on Carla. That woman takes the blame for everything! I love Carla but her incredibly dramatic life and the fact everyone but Roy tends to hate her is wearing really thin. Can she please have some happiness? Tracy's nasty act is also a yawn. Kate Ford does it very well but it's really just a round robin of spite these days. Either turn it on its head and find her a new direction or else it's time to wave goodbye I think. 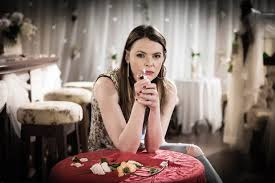 Kal has already left our screens and although I like Jimi Mistry as an actor, he's never quite worked in Corrie as far as I'm concerned. Maddie's life currently hangs in the balance. I don't care for Sophie Webster so I'm not relishing weeks of her misery. I did quite enjoy the shock explosion that seems to have claimed Maddie. Nice for a change for Corrie to hold something unexpected back.

I've really enjoyed certain aspects of this special week of Corrie but it still doesn't feel like quality, classic Corrie to me. I'm undecided on whether I'll keep watching after Fire Week, although strictly speaking it's not over yet. Let's see what happens next.

Wasn't there a fire at the factory before when Mike Baldwin owned it? Janice lit it up if I remember correctly. Not to mention the tram crash, and when Mya(?) tried to kill Dev, this has to be the most unlucky zip code ever.

There's been lots of fires! I think Underworld has been in flames more than once and Mike Baldwin had a factory before that which Don Brennan burned down and blamed Ashley whose house (now Sally's) also burned. The bookies has burned. Where the kebab shop is now used to be a DIY shop and Sally owned it and that had a fire as well. The Rovers of course, twice. Kevin's current house after the tram crash. Back in the classic Corrie days another factory burned down as well.