A fire, a wig and lots of smashed china - last night's Corrie

How brilliant was last night's Coronation Street? I can't wait for 9pm tonight to see what's going to happen. By all accounts it gets even better.

So here's last night, in a nutshell. I'd love to hear what you liked or disliked about the episode too. 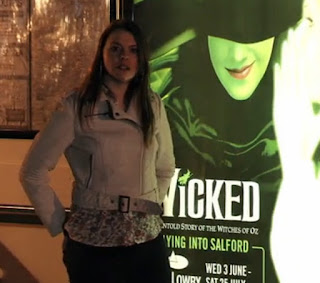 The image of the night, the week, and possibly the year on Coronation Street. No words needed. 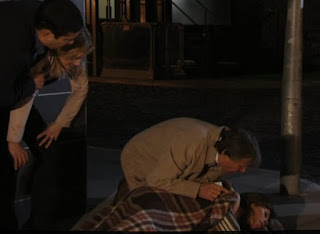 FIRE rages in Carla's flat. Leanne breaks the door down, she and Kal save Amy (who isn't in a dairy-induced coma). They almost make it out of the flames and into safety but parts of Victoria Court started falling on their heads. Will they get out alive?  Carla got out safely, tended to by first-aider Roy who covered her with his jacket and gave her a notepad - because Roy always carries a notepad, that's just the sort of man he is - so she could write down the code to the door.  She managed to get one word out - Amy. 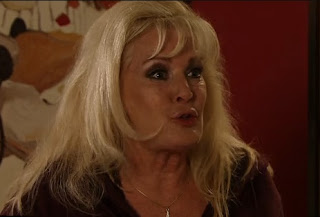 Over at the Rovers, Liz smashes everything she can get her hands on. The one thing she does want to smash to pieces is Tony, but he's not there, he's done a runner by the looks of things, so she takes out all her anger on the crockery instead. Some wonderful dialogue and comedic timing, but the heartache of Liz was painful to watch.  "I don't want a brandy! I want to smash things!" 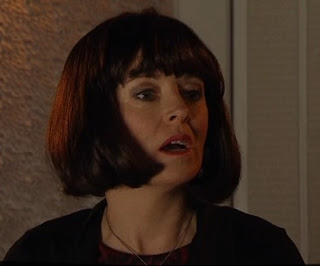 Jenny and the wig, calling herself Melanie and planning to run away with little Jack? Oh go on, then. I wanted Jenny Bradley's return to be that of a mature, settled woman, willing to make amends for ripping off Rita in the past. But as she's now turned into a full-on psycho from hell, let's go with it and pretend that's what we wanted after all.  She is her father's daughter.  Maddie has found her though... what will happen next?