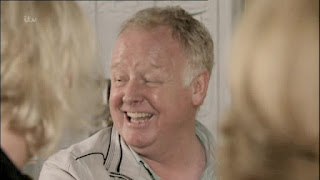 Writing fail: I really fail to believe that A. Carla would coldly write a cheque and even if she did, B. I don't think Roy would deliver it at a funeral wake. Propriety is always Roy's second nature.

15 seconds of fame award: ME! This news feed quoted me in this article about Kevin's buried baby.

Rebound award: Michael and Eileen snogging on the sofa. But understandable under the circumstances.

Hilda Odgen award: I was absolutely sure Michael was going to add "Stanley" to that "Womanly" remark.

Let the sucking up begin award: Flowers and a lame apology from Tony.

Memory loss (aka continuity fail): As we've all been saying, Kevin acted as if he didn't know what it was like to bury a child. In fact, this week was the 15th anniversary of the death of his wife Alison and his baby Jake.

If You Can't Be with the One You Love, Love the one you're with: Dev has met someone. But that might not even go anywhere. What to do, what to do?

Fashion Trend: Patterned leggings are everywhere these days. I *loved* Kylie's black and white ones! Even Liz was in on the style with somewhat less success, I must say.

Supporting character win: The character of Callum is a bit, ok, a lot ridiculous. But his two sidekicks, Macca and Gemma are the bomb!!!

Banksy of Weatherfield: Craig. Awww what a star! A memorial murial to Maddie! (but did nobody notice it in progress in the ginnel when they put out their wheely bins?) 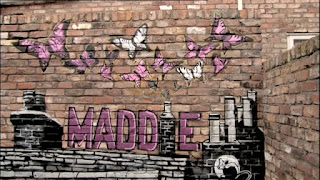 Lines of the week:
Julie "Karma. You cheat on your loved ones, look what happens!" (and Dev nearly choked on his wine. Definitely something up there)
Todd about Jason and Eva "Good looks at just the right level of dumb. A match made in heaven"
Michael to Steph "Are you deaf as well as daft?"
Todd "Wake up and smell the hair extensions. She was thick!"
Michael "Inveigled (giggles) I can say it!"
Liz "If he thinks he can get round me with a few poxy roses, which are my second least favourite by the way, well he can forget it"
Kevin "Must be hard burying one of your kids" (you would know, or have you forgotten baby Jake?)
Dev "You don't think I could just break it to her gently?"
David "Hashtag Kylie"
Beth "I’m the one with the stretch marks so I’ll ask the questions thanks" and "That is some serious nozzle control son"
Liz "If Tracy Barlow is nothing else, she's a survivor"
Sarah to Kylie "You can't just turn up after God knows how long" Kylie "Oh, like you did?"