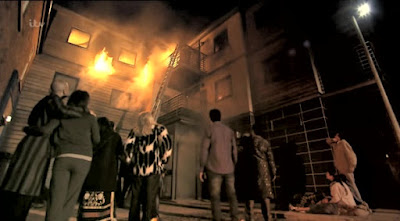 Wow, it's not over yet but already Coronation Street has had my heart pounding! Exciting stuff, isn't it? I was going to wait to blog the whole week in one go but there's just too much so I'll do the aftermath over the weekend.

It's a good thing Steve did go out of town or he'd have been huddling in a corner like Gary was after the tram crash. I did wonder why it took Jenny hours to pack a small bag when she didn't know Kevin was going to be gone so long. Was she going to pick up Jack while wearing that black wig? We knew that Jimmi Mistry and Amy Kelly were leaving the show so it was a pretty good bet they wouldn't make it out alive. At the end of day today, Maddie is clinging to life but I don't have a good feeling about it. 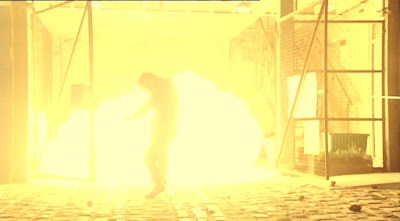 There was a lot of drama. Tracy nearly killed Carla once and then again after the candle she lit caused the fire. And it's for sure that her negligence resulted in Kal's death. Throwing Amy into the danger zone was a good move. I suspected Maddy was going to come a cropper but I thought it would be at the hand of Jenny who, so far, has managed to recover her equilibrium once she realized that Maddy may be out of the picture. But  how long will she be able to keep herself from cracking wide open? Not long.

There's a whole lot more, with screen captures, over on State of the Street, complete with some extra observations at the end.