Corrie's big week - what do you think so far?

We're two days in to Coronation Street's big fire week - what do you make of it so far? 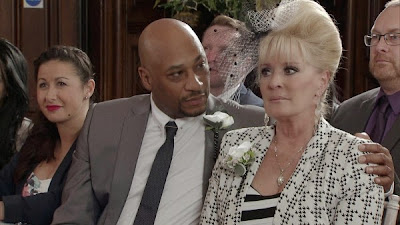 I admit, I was sceptical about the whole thing. Putting our favourite show on every night of the week at a time to suit another programme (Britain's Got Talent) to make the most of ITV's viewing figures, always seems to me to be a cynical ploy to grab viewers.

And I've never been a fan of big explosions, crashes, fires, deaths and murders on which the world of soap turn. Give me an arched eyebrow and a cutting comment instead and I'm happy.

But despite my scepticism I'm really loving it so far.  And that's not because of the fire, which we'll see tonight, and the who'll live? or who'll die? cliffhangers.  That's not why I love Coronation Street and it's not why I'm loving this week's episodes either.

Why I'm enjoying Corrie so much this week is the real drama of it all. Liz, of course, with her broken heart and broken dreams in the back room of the Rovers.  I do wish she'd slapped Tracy when she had the chance, but she might have been in shock when Tracy broke the news to her that she'd been bonking Liz's bloke in the back room of Barlow's Buys.  Maybe the slap will come later, maybe not.

And the hair.  What's not to love about Liz's beehive? It's been the campest thing this week, so far.

Carla has been wonderful, standing in as Liz's friend in the place where Deirdre would once have been.  Taking Tracy down a peg or two in the ladies loo at the Rovers was a wonderful scene and even little Amy has been on good form.  Mind you, all Amy's talk about hot chocolate and cocoa that grandad Ken makes for her, reminds us that Amy has a dairy allergy which seems to have been forgotten about even though it once had a storyline all its own. 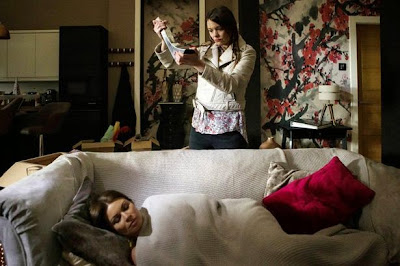 Sally and Tim have been ace, as usual. Being late for the wedding reception in the Rovers after a spot of how's-your-father. Wonderful stuff.

And of course Steve and Michelle's wedding went off without a hitch. I'm glad Liz has packed them both off on honeymoon earlier than planned so they'll not be involved in the fire. I doubt Steve would have been able to cope, in his still fragile state of mind.  It's good that they've gone off on holiday, hopefully to return when all is calm on the cobbles once more.

But until then, there's a fire coming tonight...