How the Coronation Street fire was created 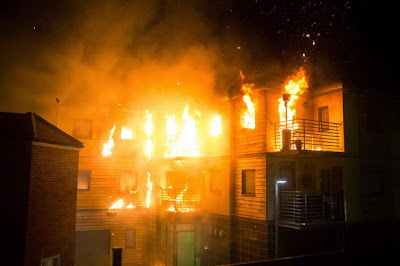 The fire at Victoria Court is the biggest fire ever seen on Coronation Street and was created  by Danny Hargreaves and his BAFTA winning team from Real SFX. Real SFX, who were the effects team behind the Tram Crash and the Rovers  Fire, have also  worked on Doctor Who, Sherlock and the US series Outlander. Danny said: “This is the biggest fire and explosion we have ever worked on for Coronation  Street. Bigger than the tram crash explosion and the Rovers fire.

“We had 30 large gas  bottles and a huge amount of explosives. A special effects team of six  controlled the fire ignition and we worked alongside the firefighters from Rapid Fire who also  work on a lot of TV and film fires. The temperatures within the sets were extreme and I  was very impressed by the cast who  did some of their own stunts. Everyone had to wear fireproofed clothing and all the sets are  coated to ensure that nothing actually catches fire. The fire can literally be turned on and off  in seconds.

“A set of the interior of the flats was built off site in a huge warehouse. For the exterior  filming a drone was used in some of the shots and we had to be aware of where that was at  all times so we didn’t blow it out of the sky with the explosion!

“The local fire brigade were advised of what we were filming but the effects were so realistic  that a resident nearby heard the explosion and dialled 999. Even though they knew we were  filming they still had to come out and check everything was ok.”

Carla's flat was shot across 2 locations. At the beginning of the episode as Carla and Michelle prepare for the wedding, the flat is in the Coronation Street studio as usual  and was shot on day 1.

Once that filming was finished the set was stripped all of  the dressings, including  pictures and even the light switches, to be re-dressed in a completely new location - the Burn Stage - situated in another part of Trafford Park.

Carla's Flat was completely re-constructed using a mix of fireproof materials called  Superlux and a double skin of plasterboard and took 5 weeks to build and dress.  New sets like Carla's bedroom and the Victoria Court hallway, as well as a duplicate  balcony, were also built in this stage.

All fabrics, including soft furnishings and clothing had to be made from natural fibres and the filling of the cushions, sofa and the padded "feature wall" were restuffed using a ceramic wool.