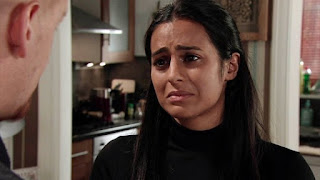 (This post was originally posted by Emma Hynes on the Coronation Street Blog in November 2015, reposted with permission.)

As weeks go, Alya Nazir has had better. The consequences of her grief induced, tinny fuelled afternoon chez Grimshaw has included being dumped by her fiancé, rejected by her grandfather, feeling the wrath of Anna, and having her infidelity bandied about about over knickers and French 75s.

When reviewing last Friday’s episode, I remarked that I felt she cut a sorry dash, and evoked sympathy. However, comments left on the blog and received on Twitter revealed that I appeared to be alone in feeling this way, with not one person saying they shared my pity.

I wondered how it could be that a young girl who has lost her mother, then her father in tragic circumstances; who has seen her ambitions at Underworld thwarted, has been forced to contemplate the prospect of Anna as a mother-in-law, suffered a rather public vested interest in her love life from day one, and is clearly feeling guilt and remorse, could fail to induce any sympathy whatsoever.

Yes, her ambition at Underworld was, at times, unbecoming. No, she should absolutely not have cheated on Gary. Nevertheless, I would’ve thought that her difficult life experiences and the pressure she is under at home to make everyone proud would have counted for something. Perhaps not. Maybe there are some that never really bought into Gary and Alya as a couple, and such viewers could therefore care less whether or not she has been unfaithful. On these theories, this sympathetic viewer can only surmise.

In any event, I remained surprised at the unanimous indifference and lack of sympathy I had encountered, so I decided to take advantage of Twitter’s new poll function to see if this response was across the board. Suffice to say, I was intrigued by the result. 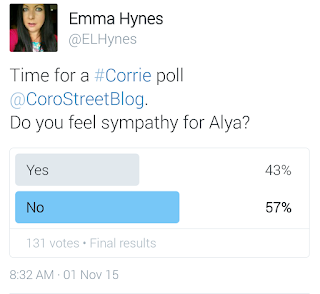 Of the 131 viewers who cast their vote, there really wasn’t much in it. While ‘No’ won out, I was intrigued to find that 43% were prepared to spare a thought for her.

I'd love to hear from this silent ample minority. What is it about Alya that tugs at your heart strings and has you feeling sorry for her?

I'm also just as interested to hear from the majority. As above, I find it interesting that a character with her history fails to induce any pity. Why is that the case for you?

And finally, let's spare a thought for Gary, pictured here in happier times. 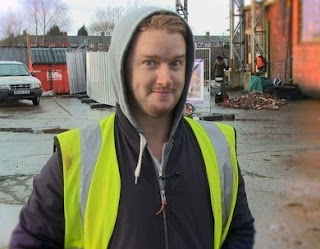 Gary is not lily white. Look what he did to Izzy! But I don't see Gary and Alya together.

Alya and the whole Nazir family are something different, an injection of fascinating curosity, into the society of Coronation Street. Some of the stories around the family have been surprising and some not so fascinating, but they all show a normal family of another culture integrated into The Street, the same way we have similar integrations everywhere.

I am enjoying the storylines with the Nazirs. The melodramas of the other storylines were getting stale. Even the annoyed amusement over Mary's antics was losing it's novelty. Now, it's back to wondering what on earth she will be doing next. I also like the addition of Cathy and her sister & son into the community.

Am I wrong, but didn't Alya sleep with Gary when she first came on Coronation Street.

Did I miss something, but weren't Alya and Gary broken up when she slept with Jason? They got back together afterwards as I recall. Wasn't she reacting to the death of her father at the time?

So while I have a lot of sympathy for Alya, I would have a lot more sympathy for her if she stopped the self-flagellation, and pointed out to people that, technically, she and Gary were broken up (and had no idea they would get back together) when she had the one night stand with Jason.

Gary was a lot more interesting and seemed to have a lot more character when he was with Izzy; I never really felt their breakup.

I do feel for poor Alya. I made mistakes when young and still suffer for them and wonder if this will haunt her for a long time. It's a soap so probably not. I did think at first that Gary and Alya were broken up when she got together with Jason, but after she reminded us that Gary had spurned her request, I began to wonder about the sequence of events around the break-up.
I too never believed the relationship between Gary and Alya. Something would have happened sooner or later.

I feel sorry for Alya and absolutely hate the way she is being treated. Gary is hardly pure as the driven snow. I felt really bad for her when idiotic Anna stormed into the factory and confronted her in front of the staff and then demanding to know who she slept with(none of her bloody business!) Aidan should have told Anna to leave the premises it is private property and if she wanted to speak to Alya wait till after work. The hypocrites on the street infuriate me.
I never got Alya and Gary as a couple at all they have absolutely nothing in common and I could never get why Sharif and Yasmeen thought he was so great! I think at the end of day Alya will be glad that the relationship is over.