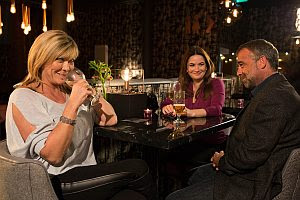 Sarah has a decision to make and Kylie is by her side. The Platts get shocking news. David and Kylie have a major falling out. Can Kylie persuade him to come back? Johnny gets a big surprise from Rob and then confides in Liz. Robert wants to know if Tracy has seen Rob. Will she lie to Robert like she lies to Rob? Robert suggests a new direction for Tracy's shop. Rob pressures Tracy and plans to assess the competition. Rita discovers Brendan's secret but Mary has deaf ears to her warnings. Some of the singles attend a singles night and there are dates in the wake. The Good Samaritan publicity makes Michael feel even more guilty and the awards ceremony goes pear shaped.  Decorations go up and so does the pressure on Tyrone. Zeedan gets a new job. Carla and Kate bond over wedding dresses. A table tennis tournament is planned. Hope is hospitalized. Will she be home for Christmas?

For more details and photos, visit the Moosejaw Mercury at Corrie.net