Terence Maynard steals the show in Aladdin - oh yes he does! 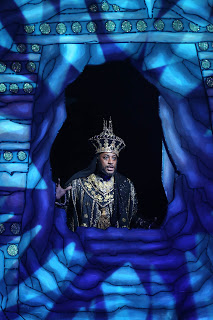 I adore pantomime, I really do.  And given the chance to see a Corrie actor on stage in panto at my local theatre was an opportunity I was not going to miss.  Off I went to our glorious Sunderland Empire last night to see the panto Aladdin starring Terence Maynard in the role of evil Abanazar.

Terence has gone into panto fresh from his stint on Coronation Street as Tony Stewart – making the move from a baddie on screen to a baddie on stage.  Oh, and what a baddie he was!

In Coronation Street, Terence Maynard as Tony broke Liz McDonald’s heart, ripped her off a share of the Rovers and toyed with Tracy Barlow. He was nasty all-round, a real villain but one with charisma and charm and I hope he’ll return to Weatherfield soon. 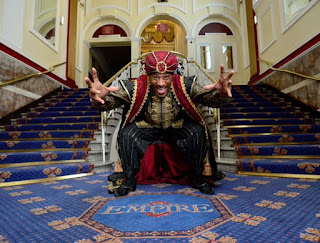 On stage in panto as Abanazar, Terence Maynard stole the show. He snarled, he sneered, he was evil and bad - everything a good panto villain should be.  But he also played the part with a tongue-in-cheek air, which of course is the style of panto, and it made evil Abanazar the most fun to watch.

Corrie received a few mentions from Abanazar with nods to Liz McDonald, Barlow’s Buys and Weatherfield.  And Terence’s background as a Shakespearean actor was given a good send up in typical panto-style. “I’m classically trained!” he retorts at one point.  At another, Abanazar makes such an over-the-top panto entrance which Terence milks for all it’s worth. Just when you think he’s done with his lines, it goes on and on and when he’s finally finished Widow Twankey nods to the audience: “You can see why we paid good money for him! He’s a proper actor!”

He certainly seemed to be enjoying himself on stage, relishing the noise and chaos he caused in the audience when he was booed all the way from the front row of the stalls to the back of the upper circle every time he appeared.

As such a wonderful actor, it was no surprise that he could pull off the part of a panto villain with aplomb. What was a turn up for the books was when Abanazar had a solo singing spot, and Terence rocked it all the way and back - and then some. He’s an excellent singer and I noticed in his credits from the panto programme that he’d played the part of Billy Flynn on stage in Chicago. You can watch him singing on that show via the wonders of Youtube below:


Starring alongside Terence Maynard in Aladdin is Alison Hammond from ITV’s This Morning as the Slave of the Ring.

But it was Widow Twankey played by Ian Good (who also directed the panto) who, for me, was up there with Terence as one of the stars of the show. 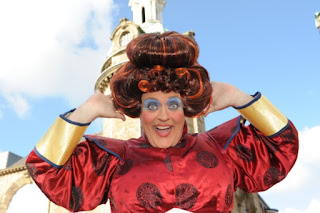 Aladdin, the pantomime runs at the Sunderland Empire this festive season. The full cast and ticket information can be found here.


Check out our list of Corrie stars appearing in pantomime this Christmas at a theatre near you.