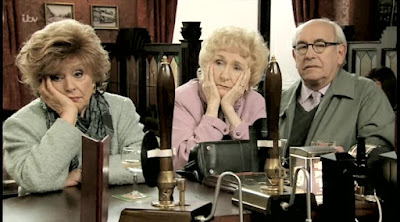 Sacrifice award: Steph called Jamie's bluff. He did it. But Luke is free from the blackmail. *and* she had him arrested!

Cat out of the bag award: Leanne finally admited what Simon's been doing and Luke finally admitted that Jamie was blackmailing him over Steph's photos.

San Weatherfield Fault award: I think Robert's discovering a very major fault under the foundations of what he thought was a reformed Tracy. (See the winning line of the week)

Black or White award: In Tracy's world, things really are black or white. No shades of grey there. No compromise.

Soap cliche: Steph intended on lying to Andy about what's going on. Lies, lies and damned lies, they're a soap staple but they don't half wear me out.

New View! We don't usually see Dev's living room from this angle, with the fireplace wall in the scene. The camera is usually shooting towards the couch from that wall. 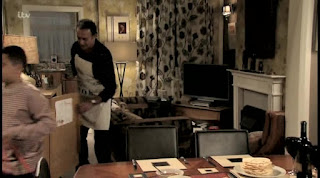 Lines of the week:
Winner: Robert to Tracy "Get out, you poisonous little bitch!" (OOOOOHHHHHH!!!)
Ken to Tracy "When it comes to bad behaviour, I hardly think you can sit in judgement"
Gary "I'm swearing off women" (yeah, right)
Ken to Tracy "Amy runs rings round you. When she's not running rings round me"
Norris to Mary "You're like a walking Mills and Boon"
Leanne to Tracy "When it comes to self defence, you're a pro" and "I've been with Robert all day and he'd rather boil his own head than spend another second with you"
Mary to Norris "Reign in your rudeness, sweetcheeks"

Did Mary call Brendan a 'sausage' when he walked into the Rovers?
Karen