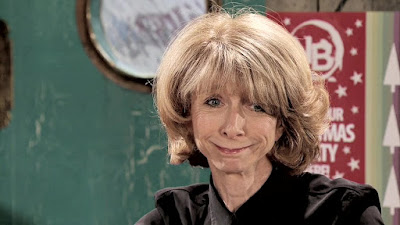 Poison Ivy award: Gail was quite catty about Carla's proposal to Nick! She apologized. But she didn't mean it. Wonderful stuff!

Takes one to know one award: Sarah might accuse David of doing what it takes for his own ends, but Sarah's just as capable of being that devious, too. She did steal the Milan job out from under David's nose, you may recall. Gail might be hanging on to lingering thoughts about Kevin but she's right, Sally certainly clung to Kevin for years longer than she should have! 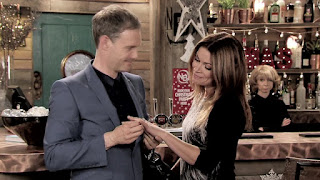 Soppy Romantic Award: Nick. yes. I admit it. I had a tear in my eye.

Gooseberry award: Is Faye jealous of Caitlyn because she's crushing on Craig or just because she wants to be Craig's only friend?

Face-Palm award: If Dee had Michael's mobile number, why didn't she just use that in the first place instead of calling the cab office?

Karaoke award: Sally singing "Walking in Memphis" at the kitchen table. Did a good job, too!

We All Fall Down award: Nobody can figure out how Sarah tumbled into the van even after they all pointed out how drunk she was. Kind of explains it right there, don't you think? 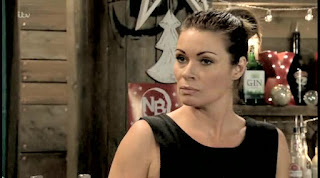 Lines of the Week:
Kate to Carla "You're going to have to teach me how to death-glare one day!"
Carla "I survived the Barlows. I suppose I can survive the Platts."
Sally "Isn't it time you just let go of Michael? You might come across as a bit..." Gail "Kevin. That's all I'm saying..."
Audrey "Can you please stop talking about dead animals, it reminds me of something out of Stephen King"
Todd "It's good to know Michael's as good at getting things into people's houses as he was at getting them out"
Sally to Tim "The only dirty thing you're going to be doing this afternoon is my windows" (but she thought about something else, too!)
Carla about the Haberdasher's ball "It's so boring, paint watches *it* dry!"
Faye to Craig "If you were a girl you'd have told me by now and we'd be half way through sorting it out" (she's right!)
Gail "I'm sure if Carla saw a chance to nail him, she grabbed it with both hands"
Kylie to David "They seem to follow you around, accidents"
Audrey "That was very nice" Gail "I even managed to keep a straight face" (LOL!)