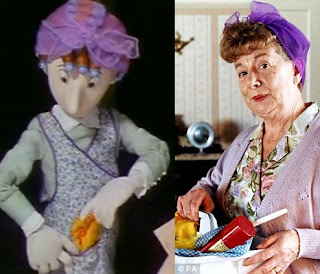 In today's Guardian G2 section there's an article all about "How we made... Fireman Sam".

Creator Dave Jones says he deliberately based one of the characters in Fireman Sam on Coronation Street's Hilda Ogden. And as you can see from our picture above, the similarities are all there!

Dave Jones says: "The idea was for me to write the storylines, and I didn’t envisage beyond 10 episodes. Then I realised that if I wrapped it around a strong cast of civilian characters, the series could have the feel of a soap opera.

"The naughty boy, Norman, was unashamedly derived from Dennis the Menace. The touchstone for Dilys Price was Hilda Ogden from Coronation Street, a nosy old lady."