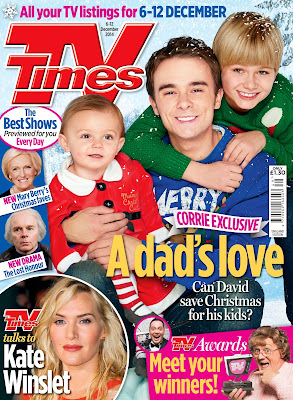 As we start December and our thoughts turn to Christmas, we've been running a retro cover from the TV Times each day for a few days.  The covers of the TV Times were all be Christmas ones that featured Coronation Street over the years.

This final TV Times cover is from last Christmas 2014 and into the New Year of 2015. It was at the start of the Callum storyline when Callum came round to the Platt's and caused havoc.

We hope you've enjoyed our little look back at some of Corrie's past Christmas covers of the TV Times.

Email ThisBlogThis!Share to TwitterShare to FacebookShare to Pinterest
Labels: christmas 2015