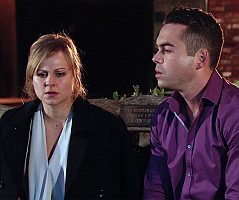 Sarah's home from the hospital. Gail wants to keep her close so she can look after her, even letting her share her annex with her but of course that's not going to be relaxing for Sarah. She allows a bit of fussing and then decides to go to work and then go back to Nick's for the night to sleep in her own bed. She did take on too much, though. She really is still a bit too done in to work. Todd has his eye on her and I think he can tell something's up. He did know her very well back in the day. So well, that he remembered the food she craved while pregnant last time, the same thing she's eating now. He's guessed. She doesn't know whether to keep it or not. It's a big decision.

Bethany continues to make excuses to skive off school. It worked, too, she and Sarah went shopping for the afternoon. Kind of nice to see Todd and Sarah reconnecting as friends. Kylie's on edge and wonders why Sarah seems to be skulking around. Why should Sarah tell Kylie who she was on the phone with? Kylie found an address Sarah wrote down and deduced the truth about the baby. Good scenes between the two women.

Robert is being a good mate to Leanne and manages to convince Simon to go to the counsellor again, even to try a half dozen sessions before deciding to give up or not. The price he pays is to go with them on the session that day which he does, to help the boy. Simon still didn't get on well, though.

Robert lies and cancels his date with Tracy which is like waving a red flag to a bull, because she sees he and Leanne getting into a cab (Simon is already in it). The end result of this is that Tracy goes to the prison to see Rob. He'd sent her a visiting order that day and she probably wasn't sure if she was going to go or not, even though she's already told Todd Rob is the love of her life. What does that make Robert, then? Honest. He did admit he lied in the end. 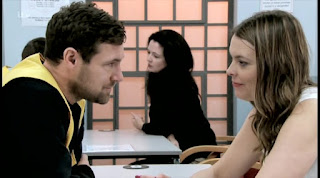 Rob smooth-talks Tracy, with an answer for every one of her questions, making out he misses her like mad. He pours it on thick and she might pretend she isn't buying it, but she likes it anyway even though she feels like he's messing with her head. He uses guilt, as well, and successfully, especially when he gets emotional over Deirdre's news and Amy's near death experience in the fire. He manages to get a bit of information out of her about Johnny and Aidan's involvement in the factory. He's even using the L word. Oh, he's good. And she lies that she's not met anyone else.

And that person that she's not met was caught hugging Leanne and Tracy didn't even flinch, that's how much seeing Rob messed up her head! Not so much that she told him the truth, though and she's telling Rob to send any other visiting order to the shop. Doesn't want Robert to find out, of course.

Another one that is about to get his head messed with is Johnny. Johnny's got a visiting order, too and he has no idea why and neither does Carla. Rob hasn't seen Johnny since he was a kid. Carla knows Rob's got something up his sleeve, but what is it?

Finding out that Brendan is married has done Mary's head in. Even if the couple haven't crossed the physical line, he's telling her he's fallen for her. So why didn't he tell her he was married when he first met her, before all that happened? Because he's a love rat, that's why. Will Mary continue the relationship? He's making promises. The same old promises most unfaithful men make.

Audrey admits to Rita that she's jealous of Nessa and is upset she missed her chance. It appears that Nessa's habit is to get a crush, go for it with all she has, then drop the fella and that could happen to Ken! Meanwhile, Ken and Nessa are having Roy and Cathy to tea. During preparations, you can kind of tell that Nessa is not quite as into vegetarianism as Ken. She brings him a gift which flummoxes him a bit. He comes in later to model what she's bought him. Jeans. They make a big deal of it. But he wore jeans that she persuaded him to buy a couple of weeks ago. She's very good at guessing men's sizes. She's also very good at making herself into whatever she thinks the man wants, including, in this case, being a vegetarian convert which Cathy knows isn't true. I did laugh at the sisters fighting in the kitchen, Cathy highly disapproving and Nessa defending herself while Ken and Roy, hearing every word, turned up the music! 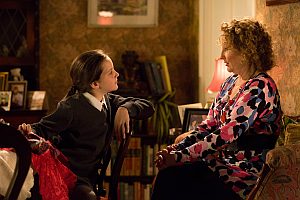 Even when she found out how he really didn't like them, he managed to smooth things over and when she suggested she stay the night, he accepted. Leave it to her to make sure to rub Audrey's nose in it, though, both the night before and the morning after. Nessa stayed the night but i wonder if she let Alex know she wasn't coming home? You remember, her son? The one she got upset with when he stayed out and didn't call? Anyway, it was a bit rude giving her Tracy's dressing gown though I suppose it could have been worse, he could have given her one of Deirdre's.

Nessa knows she'll never win over Tracy but she's doing her best to make friends with Amy. But Amy is her mother's daughter and can see right through Nessa. She's not above using it, either, for whatever she can get out of Nessa! She did ok from the shopping trip to the markets though not as well as when her Grandma Deirdre took her, as she delighted in pointing out. Then she ame over all Tracy-lke and put Nessa firmly in her place, with a wonderful scene. Don't hurt my Grandad or I won't be responsible, with Deirdre's picture smiling over her shoulder! HA. 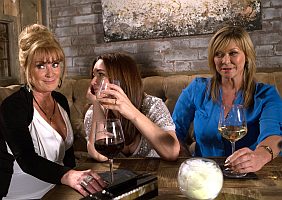 Liz, Erica and Anna, all three of them single and free, decide they'd still like to have a fella. Erica persuades them to go to a Singles' Night. Liz lends a very shiny top to Anna who actually looks quite nice in it. That and a bottle of wine is making Anna brave and gobby. They tease Erica about Dev. Anna gets the hangover from hell. Sally is still trying to push Sophie and Kate together, inventing reasons for them to be in the same place at the same time. They seem to be making friends at least but Sophie realizes what Sally's up to. Sophie really feels it is too soon to pair up again.