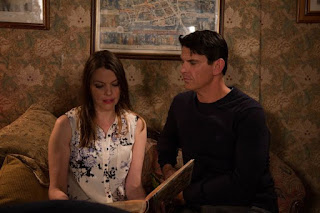 (This post was originally posted by Scott Willison on the Coronation Street Blog in November 2015.)

Good drama springs from character and situation; it's not imposed.  It's an organic development.  Sometimes soap operas get this wrong though, and the audience can see the joins.  The cogs that turned to bring a situation about are obvious.

Brookside was terrible for this: a new family or character would be issued purely so they could cover an "issue".  Nat and Georgia may as well have turned to the screen and said, "hello, we're here to talk to you about incest for the next year."

Coronation Street isn't quite as bad as that, but sometimes you can see the strings being pulled, and it hurts.  I'm pretty sure this is why I've never taken to Robert Preston.  His introduction was contrived; I could see the join.  I can see why bringing back Tracy Barlow's ex-husband might be an interesting storyline.  When I saw that the sweetly pudding faced boy she married at the turn of the millennium had been transformed into a six foot tall brooding "hunk", I sighed.  "Oh, he's been brought in for us to leer at." 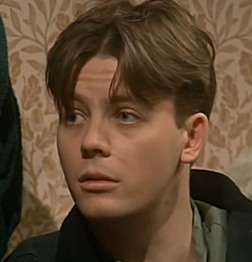 Worse was to come, and I'm not talking about his accent (fun fact: Tristan Gemmill was born in Royal Tunbridge Wells).  When they got into a discussion about his life since divorcing Tracy, Robert revealed he was now a talented chef.  He was a carpet fitter when he was married to Tracy, but apparently, at some point in the last twelve years, he'd developed a deep and abiding love for the culinary arts.  Even Tracy boggled at that one, pointing out that he was a terrible cook.  Still, being a good chef is just something you can learn, isn't it?

Meanwhile at the Bistro, Leanne and Nick were in a flap.  You're never going to believe this, but they needed a chef!  The old one had stormed out (off camera) and now, blimey o'reilly, they were in a right pickle!

I couldn't just hear the cogs turning, I could see them right in front of my eyes.  It was ridiculously contrived and I didn't believe a moment of it. 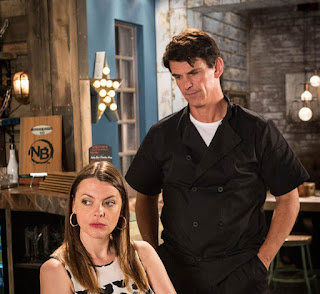 Robert has since continued on the Street, standing at the back and glowering from under his eyebrows, but this week he's suddenly, bizarrely, turned on Tracy.  A couple of months ago, Robert was deeply sympathetic when Tracy revealed that in an act of revenge, she'd broken into a flat, set it ablaze, then, when two people died as a result, she let Carla take the blame.  Never mind, he said; let me soothe your anguished psyche.

Now, Simon belts Amy and suddenly Robert is demanding Tracy apologises to Leanne for being angry.  A quick reminder: her daughter was hit by another child.  Tracy has every right to be annoyed, but in Robert's world, this is a heinous crime that means he can't stand to be around her.

And then I saw the cogs again.  I remembered that prior to Sarah Harding's appearance onscreen as Robert's ex-wife Joni, we got press reports about how the producers were "thrilled" with her.  There's this amazing quote from the Manchester Evening News:


Corrie producer Stuart Blackburn has said of the casting: “Sarah is proving to be a gifted and exciting actor and I’m absolutely delighted to have her on board, the viewers are in for a treat as her character will be right at the heart of a massive new story for the Barlows.”

In fact, just ahead of her appearance, she revealed that they'd asked her to return later in the year.

“It turns out they’ve given me more episodes to film,” Sarah revealed to The Sun. “But I don’t know about doing it full-time. You only get about seven days to learn your lines. Sometimes you have to learn on the spot.”
“It’s not like when I’ve done films and you learn the script well in advance. I’m nervous because people are going to expect high standards.”


And then Sarah Harding appeared onscreen, and blood spontaneously poured from the nation's television sets.  It turned out Ms Harding could not act.  Not even slightly.  There were eight week old bunches of flowers outside Dev's shop with more presence and talent.  Social media exploded, and newspapers were full of gleeful coverage about how awful she was. 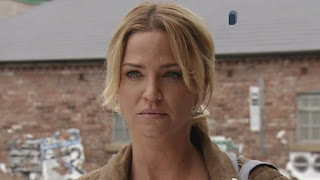 So here's my theory: this wasn't meant to be about Leanne at all.  This storyline about a wedge appearing between Tracy and Robert was to have coincided with the return of Joni: one ex-wife against the other.  Sarah Harding's distinct lack of talent put paid to any return appearance, so there was a hasty rewrite and a jiggling around of storylines.  Cogs turning.

I could be wrong.  I probably am wrong.  I prefer my version, though, because otherwise it just means the characters are being written in a horribly contrived and inconsistent fashion for no reason at all. 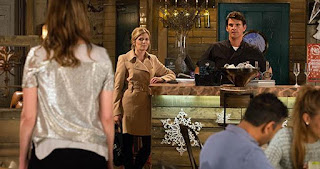