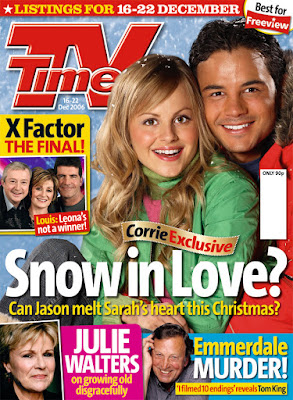 As we kick off December and our thoughts turn to Christmas, we're going to be running a retro cover from the TV Times each day for the next few days.  The covers of the TV Times will all be Christmas ones that featured Coronation Street over the years.

This TV Times cover is from Christmas 2006 and into the New Year of 2007.  The cover is to commemorate Sarah and Jason trying to get back together.  However, there was a shocker in store when a mystery girl turned up on Eileen's doorstep on Christmas Day 2006 with a baby in her arms, telling her the baby belonged to Jason. It didn't - it was Charlie Stubbs' baby but Sarah was furious and wouldn't believe Jason's denials that the baby wasn't his.

Email ThisBlogThis!Share to TwitterShare to FacebookShare to Pinterest
Labels: christmas 2015