The Undoing of Tony Stewart 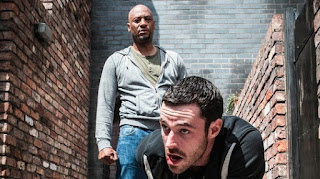 (This post was originally posted by Emma Hynes on the Coronation Street Blog in November 2015.)


Tony Stewart, an alpha-male cocktail of menace and charisma, with a seemingly endless pot of money and an even greater reserve of self-confidence, sadly bid his farewell to the cobbles this week. Since his return in January 2014 in the form of Terence Maynard, it has been a rollercoaster ride of threats, deception, dodgy dealings, violence and infidelity. Far from a one dimensional ‘villain’, however, Tony’s charm, sense of humour and fearlessness in the face of pretty much anything made him rather endearing, as did his penchant for taking matters into his own hands, particularly when avenging his loved ones.

He returned with one aim: to make up for all the years he’d been an absent father to Jason. This noble aspiration ensured we knew from the off that he couldn’t be all bad, despite the wealth of evidence to the contrary. Within a couple of months he had gotten Jason the gym contract by dubious means, threatened Steve to back off so he could pursue Liz, and started supplying dodgy goods to Barlow’s Buys. He swaggered, schemed, seduced and splashed the cash, and it was great.

A man of questionable means, during this stint on the street Tony bought both the builders yard and a house for Jason, paid Fiz and Tyrone off to prevent them taking his son to court for negligence, bought a 50% share in Barlow’s Buys, compensated various shady characters for trashing the shop and threatening Liz, forked out for Steve’s wedding, and paid his tax bill, but later got the money back and more besides by conning him into selling his 50% share in the Rovers to the fictitious Travis Limited, AKA the inimitable Tony Stewart. 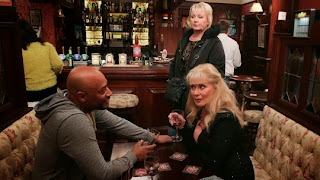 In addition to Tony’s brilliant portrayal by Terence Maynard, what I enjoyed about his return was the trajectory from January 2014 to now and how the storylines which played out revealed his depth of character. While cocksure and confident from the off, Tony was prone to the odd error of judgment. Various well meaning but ill thought out gestures angered Jason who resented his father’s interference. Seeing Tony baffled at how he’d managed to offend revealed a weakness in his otherwise confident demeanour. It showed that when Tony allowed his emotional urges to inform his dubious actions, the outcome wasn’t always as he might have intended.

As time progressed, his urges and emotions began to dominate, and his life began to unravel. It’s hard to know which was a worse error of judgement for a man like Tony, moving in with Liz, or having an affair with Tracy. While the exposure of his infidelity would prove to be his ultimate undoing, I think his emasculation while living in the Rovers was the real driver for much of his subsequent behaviour.

Finding himself funding Steve’s wedding and getting none of the credit as well as being asked to pay his tax bill saw him mocked by Tracy for being a doormat. This wounded Tony's ego and saw him rail against the situation he found himself in, as if intent on restoring his masculinity. Fake assaults, imaginary debt collectors and plans for a non-existent trip to Spain ensued, all of which saw Tony trick Steve out of his share of the Rovers.

When his infidelity and betrayal was revealed by Tracy on Steve and Michelle’s wedding day, he disappeared. 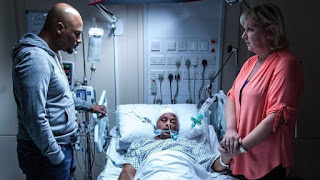 While he received a frosty reception on his return, everything changed when Jason was hospitalised after a beating from Callum. Eileen and Tony united over their son, and we saw Tony crying for the first time, revealing his guilt at abandoning his son and his upset at failing to protect him now.

Once Tony’s lowest ebb had been reached, and we had seen the full breadth of his character, he began to regenerate, gaining his lost power and agency. Angry, frustrated and hell bent on revenge, he turned full alpha-male once more, and exacted his punishment on Callum with a violent beating. We were reminded of the risks attached to his combination of emotion and action when Liz interrupted to tell him “You can still be a good father to him, but not like this”. After letting Callum go, Tony revealed that he was concerned that it was the only way he knew how, and that it was all he could do for his son.

Motivated by his desire for revenge and to protect his son, Tony was back to himself, saving the day at Callum’s flat when Jason sought his own revenge, and torching Callum’s car. But his emotions were about to betray him a final time when Liz duped him into extracting himself from Barlow’s Buys, and signing Steve’s share of the pub back to him. As Tony found himself on his knees proposing, he was stunned to learn he’d been conned himself.

You might ask how such a shrewd man would allow himself to be duped in such a manner, but when you look back at his almost two year return to the cobbles, the answer is clear; when it comes to matters of the heart, Tony’s clever, calculating ways take a back seat, and he pays for it every time, because the combination of emotion and deeds borne out of a head full of questionable morals has proven a deadly mix.

I get the strong impression, however, that Tony is going to be okay. The fact that he's resourceful and a survivor makes his character infinitely interesting and unpredictable; and the fact that he also lets his heart do the talking endears him. "Try not to kill anyone", his parting retort to Tracy's "try not to pine for me", sums up Tony's attitude and ability to pick himself up and dust himself off, and must rank as one of the best parting lines uttered on the street.

Tony will be very much missed, and I sincerely hope we haven't seen the last of him. Not only are we at the loss of of Terence Maynard’s great performances, but characters of Tony’s ilk are in short supply. Coronation Street needs that strong, brooding, seductive, yet flawed, alpha-male, and while it may not be the time to introduce any more new characters considering the number that have joined of late, this is most certainly a role which needs filling.