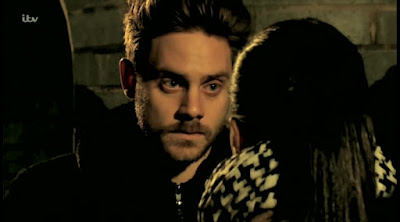 I like to put the spotlight on some of the storylines that made an impression on me during a month, good or bad. This month, I've had a bit of a rant about Ken and Nessa, well...mostly about Nessa, a grasping and selfish woman. Would Ken have thrown himself into a new relationship so soon after Deirdre's death if Nessa hadn't thrown herself at him and presented herself on a plate? I think not.

I'm very glad Simon is getting the help he needs even if it does look like it's going to be an uphill battle with the boy. I hope Zeedan continues to be a big brother figure, Simon needs that. I'm not so sure he needs yet another father figure which may or may not be Robert. Tracy's attitude might push Robert right into Leanne's arms and that might not be so good for Simon in the long run if it's yet another doomed relationship. I'd like to see Leanne refuse to take anything more from Robert  other than friendship. He can still be a support for Simon without warming her bed.

The story with Jamie blackmailing Luke was fairly brief, brought in to add a bit of drama around Maria's exit but focussing on a very modern issue. I didn't mind the storyline and I really liked the way Steph handled things when she found out. She was upset, yes, but with support, she stood up and looked Jamie in the eye and had him arrested. The actor playing Jamie was great, suitably icky and creepy and played very well. Tisha Merry was top notch and I liked seeing more of the brother-sister relationship between Steph and Luke.