The Beatles on The Street – Streetlemania! 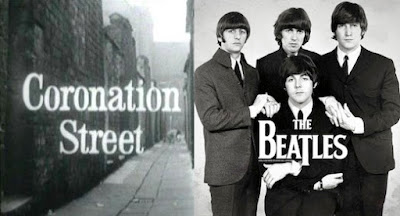 (This post was originally posted by Martin Leay on the Coronation Street Blog in December 2015.)

Did anyone see ‘The Nation's Favourite Beatles Number One’ the other week? If not, then I would highly recommend streaming it from the newly renamed ITV Hub, where it will remain for another 6 days (unfortunately, not available in Canada).

I watched it on the train to Manchester for the Coronation Street Blog Christmas Do. It’s a cracking rock doc and I was particularly pleased to discover that when The Beatles weren’t busy shaking the world, the Fab Four liked nothing more than to watch a bit of telly and, according to former Granada Producer Johnny Hamp, Coronation Street was one of their favourite programmes. 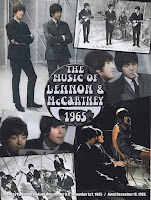 Hamp produced the TV special ‘The Music of Lennon and McCartney’, which was filmed at the former Granada Studios on Quay Street, a site that we bloggers visited earlier this week for the very last time.

The Beatles show went out in December 1965 - when Corrie was just five years old. A lot of it can be seen on YouTube and it really is fascinating footage. During the performance, John Lennon played the harmonium on ‘We Can Work It Out’ (which came in at number 17 in the ITV poll).

But it wasn’t just any harmonium that Lennon used that day at Granada. Oh no - it was the very same instrument that Ena Sharples played in Coronation Street! Have a look at this:

Apparently, when the Granada special was being recorded, the Corrie cast kept on sticking their heads around the door to catch a glimpse of The Beatles. The cast could have got a lot closer to the band, though, according to a wonderful article I stumbled across on a Beatles fansite (available here).

The story goes that there was a proposed plot which would have seen The Beatles’ tour bus break down in Weatherfield while the band were on their way to a gig in Manchester.

Naturally, Beatlemania would soon take over and with the police unable to control the crowds, the band would knock on Ena's door in search of sanctuary (and possibly a harmonium?!!). Ena would take them in and the Fab Four would file in past her, bringing the episode to a close. 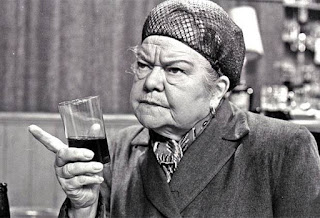 In the next episode, Ena would persuade The Beatles to perform at the Over-Sixties club. The gig would be gate-crashed by a load of teenagers and two generations would come together for an amazing concert, after which The Beatles would rush off to their other show in Manchester!

The Beatles were apparently very keen to do it but weren’t able to fit the rehearsal dates into their schedule and so the plans were scrapped. What a shame! 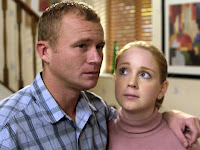 I like to think, though, that in the parallel universe of Coronation Street, The Beatles did in fact play Weatherfield in the 60s. Perhaps that would explain the signed Beatles programme that the Peacocks found in the attic of Number 13 a few years ago!

When I arrived at Manchester Piccadilly to catch my 7am train back to London, everything came full circle when I saw an advert for a new collection of The Beatles’ chart-topping hits. 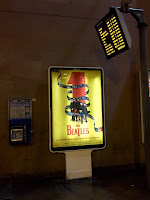 It made me think about the vital contribution that Coronation Street and The Beatles – two great institutions that emerged from 1960s Northern England – have made to the UK’s cultural history.

And then I thought about the original Cavern Club in Liverpool, which was knocked down. It was a decision that city leaders would soon regret and the Cavern was later rebuilt using many of the original bricks.

I don’t want Manchester to make the same mistake by demolishing the old Corrie set. Wouldn’t it be great if the developers decided to keep at least some of the magic alive?

Coronation Street is in our ears and in our eyes. It is also in our hearts. There is so much history in those cobbles and it would be a tragedy for it all to be bulldozed for flats and shops.

Email ThisBlogThis!Share to TwitterShare to FacebookShare to Pinterest
Labels: Corrie history, The Beatles