A shorter version of the awards this week since we didn't have any Corrie on Christmas Eve or Christmas Day. Hope you all had a lovely week! 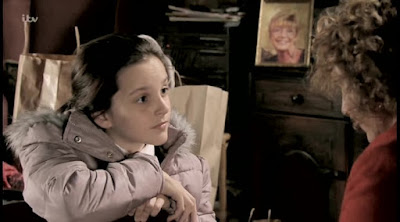 Chip of the Old Block Award: Amy could see right through Nessa's attempts to impress Ken by making sweet talk to his granddaughter and is about to take full advantage. Then Amy marked Nessa's cards well and truly, with a threat about not being responsible for her actions if Nessa hurts Granddad! Wonderful!

One is the Loneliest Number award: Liz, Erica and Anna are determined to get back on the dating horse. They're happy with being single, mind you, but yes, they'd quite like a man anyway.

These Things Take Time award: Rita arrived to get her hair done as Nessa left for an errand and she and Yasmeen were both still there when Nessa returned. Does it really take that long to rebuild Rita's coif? (I'm guessing, yes, yes it does!)

Red flag to a bull award: For a man that insists on brutal honesty, Robert lying to Tracy about why he's cancelling their date is only asking for trouble.

Continuity fluff up award: What's the big deal about Ken wearing jeans? Nessa persuaded him to buy some a couple of weeks ago and he's worn them in the past. Are prison visiting times usually at night? Rob saw Tracy in the evening this week.

Lines of the week:
Rob "It's time I made them pay" (AND he's back!)
Liz "It's a full time job being me, you know!"
Sally to Billy "Was Jesus off duty when that blind man needed a miracle?"
Nessa to Roy about jeans "Are you going to treat yourself?" Roy "I take it that's a rhetorical question"
Todd to Sarah "Remember that grotty little flat we used to have?" (You mean the one just 20 feet right over there to your right?)
Leanne "Nice Tracy worries me more than Nasty Tracy does"
Roy "I've never quite understood the point where the old fashioned fairy cake became a cupcake" Yasmeen "Surely not a major linguistic issue"
Todd "The sweet smell of parental manipulation" (does Bethany *ever* go to school?)
Audrey to Anna "There's only so many recently widowed vulnerable men to go around"