Coronation Street: Bigger than The Olympics? 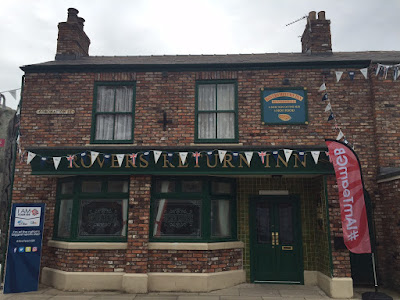 Coronation Street fans' dreams came true today, in more ways than one, when ITV threw open the doors to the drama's filming backlot to a lucky selection of visitors as part of the nationwide Team GB event. Meanwhile, in Manchester city centre, other fans were able to watch the colourful Coronation Street float parading as part of the city's Pride celebrations.

The famous cobbles at the new exterior set, which opened in Trafford Park in 2013, were partly covered up with artificial turf as the Street was transformed into a sporting arena with a climbing wall, table tennis tables, hula hoops and portable badminton courts. Fans who applied for the free tickets (and were lucky enough to be chosen in the ballot) rubbed shoulders with Olympians, sportsmen and sportswomen plus a famous face or two from the Corrie cast. 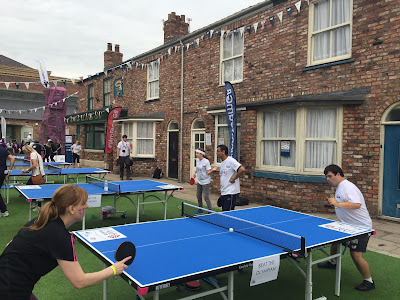 Even the actors joined in with what was billed as 'the country's biggest sports day' with many other similar events taking place around the country. The Corrie cast and crew tried their hands at table tennis, hula hoops, badminton and rock climbing. Indeed it was like watching the Classic Coronation Street episode (Ep 2428 July 9th 1984) when Bet Lynch, Hilda Ogden and Vera Duckworth supported the Rovers Return team against the Flying Horse at the Pub Olympics, with bunting and flags stretching across the Street both then and now.

Following the closure of the highly popular 'Coronation Street: The Tour' at the old Granada Studios backlot in December 2015, the Team GB event offered Coronation Street fans an exclusive opportunity to visit the actual filming location of the soap and while many of those in attendance had clearly come especially for the Corrie element, the sporting aspect was definitely not ignored.  This was demonstrated in the warm atmosphere and excitement around the sporting stars in attendance, which included:

In fact, unlike at the old Corrie Tour where visitors clamoured to be photographed outside the famous Rovers Return, many were today totally engrossed in trying their hands at the free sporting activities on offer around Coronation, Rosamund and Victoria Streets and ignored the iconic Corrie buildings.

The Team GB event coincided with the Manchester Pride Festival which celebrates lesbian, gay, bisexual and transgender life and sees revellers enjoying a 'Big Weekend' of entertainment in and around the Canal Street area of the city. Coronation Street traditionally participates in the Pride Parade with a decorated float and this year was no exception. Corrie's assistant director, Woody Wade, tweeted a hint of the float's theme last week and today it was finally revealed at the Liverpool Road starting point as being fairy tale inspired.

Spectators who lined the route were visually treated to ginger bread versions of the Rovers Return pub and corner shop which were adorned with icing, Bourbon biscuits, wafers, jammy dodgers, candy canes and jelly sweets. The float's tagline was "Once upon a time, a boy called Tony Warren...." in homage to the creator of Corrie who's fairytale struggle to get the show made was dramatised in Daran Little's 'The Road to Coronation Street' in 2010. Kym Marsh (Michelle McDonald) and Faye Brookes (Kate Connor) dressed as princesses while Katie McGlynn (Sinead Tinker) was pixie-perfect as Tinkerbell and Rhea Bailey (Caz Hammod) was a very mad Mad Hatter.