Two weeks of Corrie marathon are over! Back to the regular routine! 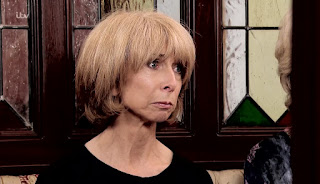 Nick stayed the night and both Simon, Eva and Aidan were surprised, but nicely so. Still, What's Nick doing offering a 13 year old coffee? Still, it's a lot of people for just one bathroom. Nick invited Leanne and Simon to move in with him but the bigger challenge is telling Gail. First, though, a proposal. Not that kind, he wants to tell everyone the baby is his. Hmmm, that's probably going to blow up in his face and Steve isn't going to be too happy either even if he can't tell anyone. He and Liz were certainly shocked to see Leanne didn't go to Liverpool after all.

Nick and Leanne presented themselves to the family in the pub and Gail was not best pleased. Audrey was just surprised and Gail thinks it's a rebound and he's deluded. I think so too. Gail was horrified and judging from their past history, i can't really blame her but she doesn't have a very tactful way of showing it, does she? That's our Gail, and we love her anyway! Well, I do.

Tracy's fizzing with curiosity and connecting all the right dots as far as Leanne's baby goes. And she comes to pound the last nail in the coffin, outing the pregnancy in front of everyone for maximum effect. Gail lost her mind and Audrey plays peacemaker. That's nice, isn't it she says. Gail started adding up the dates and jumping to conclusions because the conception date sounds very soon after Carla left and then Gail thinks Leanne wasn't even going to tell Nick, running off to Liverpool. None of her business. 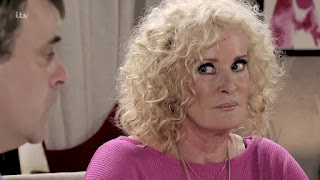 Meanwhile, Liz and Steve are losing their minds in the back. Steve thinks it's a good idea, Nick taking the responsibility but it's made Leanne nearly sick having to lie to everyone. She hates having to keep a secret and tell a lie like that even to people they really care about like Eva and Simon. But Simon is happy even if Eva is shocked and a bit suspicious. Steve and Liz have to work hard to cover their backsides though Michelle has bought the lie completely but they're not too happy to hear Michelle intends on having Leanne as her pregnancy buddy. That is going to be very awkward.

Leanne has moved in with Nick, with the help of Michelle and Liz and Steve and even Dev, much to Leanne's discomfort. Gail actually made up with Leanne, calling a truce. She's offering her time and assistance when the baby comes because of course, it's her grandchild so she thinks. And there's Liz listening to her go on about sleepovers and cousins (with Harry) and grandchildren all this and biting her tongue because the baby really is *her* grandchild and she can't tell anyone.

Liz's attitude is going to make Michelle suspicious and Steve has to have a word with her, nearly getting caught by Michelle the first time he tried to talk to her. He's trying to insist she keep the secret and don't act like there's a problem. He's desperate to save his marriage. That big, fat lie is going to blow his marriage up sky high because it's going to come out, you know it is. Steve finally put his foot down with Liz and even threatened to make her move out. 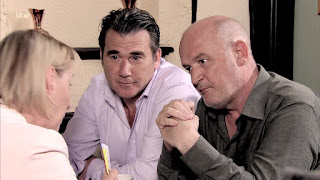 Phelan is in full suck up mode. Eileen is due back and he's flowering up the house in anticipation. But Vinny is still waiting for his cash and Phelan isn't finished finessing Eileen yet. Vinny doesn't think he can do it, squeeze the money out of Eileen. Vinny says there are lots of people wanting in on the deal so why isn't he going to them? Surely he needs more than just one investor anyway.

Well, she's back. She's not very forthcoming about talking to Jason about the investment deal, stringing him along for fun. Turns out Jason thinks it's a good idea. Phelan and Vinny now seem to have Eileen on board and it almost looked like he schmoozed Sally on their side until she found out that one of the buildings being torn down is a community centre of sorts that will really affect the neighbourhood.

It's going to affect Alex for one, he goes to a film club there with a lot of his disabled friends and that will look really bad for Sally. She's having second thoughts now and Eileen is getting cold feet. Phelan has to scramble to save his project and he makes a beeline for Alex, sucking up to him and buying him pints. Phelan's idea? Pretend to organize some assisted living flats to sway the planning committee. Sally liked the idea. Tim remains suspicious. Very suspicious.

Me, I'm trying to figure out how this scam is going to work if they're actually tearing buildings down and renovating other ones. I know they're going to build a show flat and then run off with the money, the non refundable deposits i suppose. But are they going to leave a half-developped building just sitting there? They aren't going to leave the country so how are they going to get away with it all?

Eileen is a bit wobbly having to risk all Jason's money. But Phelan has the blinders firmly attached to her eyes no matter what everyone else says. Todd was horrified when he found out what was going on. Phelan is silky and slick but he hasn't fooled Todd and Tim. She wouldn't listen to Todd's warnings. 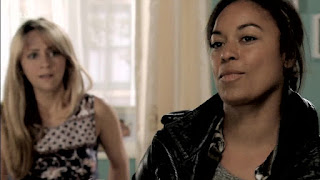 Maria found Caz sleeping rough on the Red Rec but wouldn't take her back home. Later Caz got robbed and she's really hit bottom. I don't know if it's related or not but a few hours later, Maria's flat is robbed which is all she needs. She's already had Eva gushing about Aidan in the salon and pushing her to hang out with them which is the last thing she wants so she tears a strip off Eva and insults Audrey just for good measure. After that she has Aidan on her case and then she finds the bloke in the flat and gets roughed up when the guy tries to get out. Caz to the rescue because she just happens to be walking by after. Coincidence? No, no it was not. Caz engineered the whole thing so she could get a roof over her head again. Maria you should be very worried.

Caz is the hero of the hour but Maria assumed she was only staying the one night. But Maria's a soft touch. First it's "stay a few days" and then all of that is forgotten once Maria starts getting empty phone calls, these ones from Caz herself, at least some of them. But Caz has some 'splaining to do when Liam found his dad's watch in Caz's bag. She pretend she found it outside and didn't realize it was Maria's. Maria changed her mind and Caz is back with her feet under the table

Aidan and Maria are still firing looks-could-kill at each other and then he keeps on at her to act normal but it seems to me he's acting weirder than she is when they're around each other. Laughed at Eva and Maria in the boxing class, with Maria taking Eva's frustrations about Aidan on the glove and knowing it wouldn't be the glove if Eva knew what really happened!. Then Aidan has to put up with Eva sympathising with Maria's plight post-Luke.

Meanwhile, Aidan is still trying hard not to move in with Eva and she's already making noises about the rest of their lives together. I thought he was going to throw up when she said that. Yet she can't seem to see the excuses he's coming up with would mean that fear of committment. 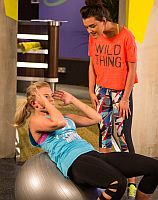 Bethany's exam results were dismal. As expected. She did say she threw the pills out but I doubt that. I've got the perfect solution to the bullying, or at least a way to cut it down, though, get a new phone number! She finally gave them to her mother who was disappointed but pleased that Bethany could at least talk to Gary. Bethany's solution is to return to the gym where Lauren is waiting to harass her a bit more. Thing is, Gary saw the tail end of Lauren's latest campaign that ended with Bethany punching her. Gary's taking up the responsibility to help. What a nice guy!

Craig is waiting to hear from the police about his application. Meanwhile, Gary has asked him to look out for Bethany. He's worried about her and thinks she desperately needs a friend. Awww. Craig ended up spilling those particular beans and you could immediately see the dawning of a new teenage crush because that's what teenage girls do. Entirely predictable but entirely realistic, too.

Poor Max, he's old enough to really have a tough time dealing with his mother's death and David doesn't know what to do to help. It's understandable, really. In the real world, if it was my family, I'd be asking Nick to help with Max when he can because of everyone, he's the one that really knows what Max feels. Aw, Michael gave Max a memory box, what a lovely idea and just what Max needs.

It's a holiday monday and the factory peeps are doing overtime except once the cat's away, they rig up a movie screen and skive off, making sure they have a stock pile of knickers first. Except Jenny tells on them behind their back and Johnny docks their pay and rightly so, I might add. Johnny never even noticed two huge white sheets hanging down on one side of the room. He decided to dock their wages but that also means that Jenny will probably lose money too or else they'd realize she was the tattle tale. She tried to talk him out of it but he had to make a point and rightly so.

Everyone is fizzy to know who told on them. Sean even checked that there were no CCTVs. They refused to work any more overtime until they find out who the grass is and with Sally gobbing off about all the legal issues and then she led them all out on a strike in the true Corrie factory tradition. Johnny is sticking to his guns and even Aidan can't talk him round.