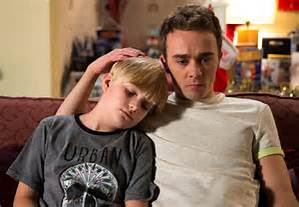 (This post was originally posted by Ruth Owen on the Coronation Street Blog in September 2016, reposted to this blog with permission.)


I am amazed at and not a little cross with Gail. If David chooses to keep the jacket he was wearing when he held Kylie in his arms as she lay dying, then that is his business and the business of no one else.

Yes, it is soaked with blood, Kylie's blood, the blood of the woman he loved, the mother of his children, the love of his life and his best friend. Who in fact has any right at all to decide what a grieving person should or should not retain as a keepsake of the deceased? A blood-soaked jacket is neither a conventional nor a traditional souvenir, but for a man drowning in grief, it is no one else's place to criticise.

She may be his mother and want the best for him, but Gail's attempts to console and advise are no help to David. Why is she so freaked out that he took the clothing out of the bin? Grief is powerful, it's raw and people in the grip of profound grief will not act wholly rationally. What's more, Gail must have a short memory as she was deeply affected by the death of husband Joe. 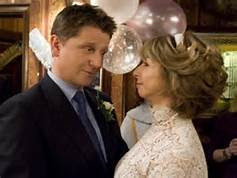 Gail tells him that he will not be able to 'move on' if he holds on to the bloodied jacket. Move on?! What? Kylie has only been dead for five minutes! It would seem wrong, somehow shoddy and insensitive for David to 'move on' just yet. and what does 'move on' mean in this context anyway? Find another girlfriend/wife/best friend? Or simply put the whole business behind him as if Kylie's brutal murder in the street in broad daylight was just  'one of those things' - and therefore not to be made a fuss about. 'Pick yourself up, dust yourself down and start all over again!'

David maintains his silence as Gail pleads, and after she finishes talking, he coolly tells his mother to 'Put it back.'

Then, he cuts off Lauren's hair and sends a friend message to Kylie's killer. Excellent! Bad David makes a return.

I have to agree,
everyone who grieves needs their
own time to grieve, and move on
at their own rate.

Agreed, I've never critized anyone on their level of grief. I loved it when David looked up with his Evil Eyes. Yeah! he's back!