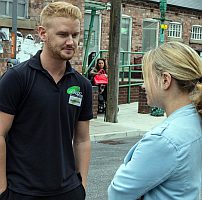 David gives Lauren a scare in retaliation. Will he have to pay for it? Maria gives Luke mixed signals then later, gets mixed signals from Caz. Aidan tries subterfuge to get rid of Caz causing Maria to call him out in front of Eva. Todd moves into the rectory but it's causing trouble for Billy who blames Sean.  Faye instigates a connection between Craig and his father. Will it be a happy reunion? Some old secrets are revealed about Beth. Robert puts pressure on Steph. Cathy wants a change in the cafe flat.