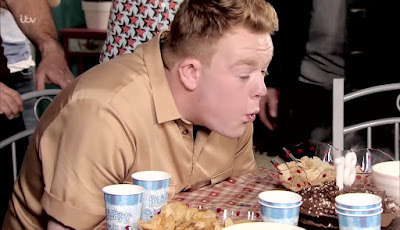 Craig has turned 18. All grown up! He got the letter in reply to his application and the man, he say no! It's to the Special Constabulary which sounds a bit like unpaid community service but apparently it's a police constable but without the power to make arrests. Anyway, Craig was rejected because he didn't declare someone with a criminal conviction. His father. And Beth knew. It's his father. And his mother was the one that put him in prison. He knew his mother lied about lots of stuff but this is a big one. Even Kirk wasn't very happy with Beth, shutting him out when he's supposed to be family. Beth might be in danger of losing everything. Craig really can't get his head around it and he's so angry with his mother. He ended up staying at Tim's.

Beth is trying to soothe Kirk with the smell of bacon but he'd already left for work because he's still ticked off with her. Craig is bereft, and he's retrieved his rat for comfort. Sally even allowed it. I'm shocked. Michelle's recollection of Sally playing peacemaker with her and Ryan has given Beth an idea. Hearing Beth heartbroken over Craig got Kirk talking to her again at least and they made up. Hearing Tim's regrets over how he messed up fatherhood got Craig thinking about how good a mother he really does have. He wants Sally to play peacemaker.

Sally's holding a mediation session and Kirk seems to think she's getting her hopes up too high. It all seemed to be going well. Craig seemed to be understanding. Everyone talked and with Sally's guidance. Craig said some good things but Beth really didn't take in what he actually said and that sent him off again, his mother doesn't listen. He's got a point.

Gemma's campaign to better herself seems to have hit a rough patch. Dev knows how to handle it, he made her Assistant Manager which he knows is really a pretend position seeing as there's only her and Chesney in the shop anyway but it made her happy and maybe she'll turn up for work on time! Dev's explanation gave Phelan an idea.

Vinny and Phelan are busy organizing while they wait for the planning permission. Eileen thinks they need a special company name for the project and it would make it seem more legit. Vinny doesn't seem to have a lot of patience for Eileen wanting to be involved and I wonder if Phelan hasn't bitten off more than he expected to chew when Vinny threw out veiled threats about Eileen if he doesn't keep her away from their dealings. Phelan's way of dealing with her is to give her a pretend position, a Concepts Executive. It'll keep her busy and out of their business. But Todd shot it down in a minute, seeing exactly what Phelan's doing but she wasn't having any of it. Eileen is so blind to Phelan that she ended up suggesting Todd leave. Thus, at least for the minute, Phelan's won again.

Sean dragged himself home in the morning after a night out though Billy was a bit put off. Don't know why. He's supposed to be happy with Todd. Meanwhile, Todd is setting up a posh hotel for he and Billy but Sean overheard him and later Eva and Michelle gusthing. Green eyed monster, I'd say. Eva overheard Sean cancelling the room and scolded him roundly. He must have rebooked it. In the meantime, Todd and Billy had a romantic meal out and, not knowing there had been a problem, Todd's surprised was busted by the hotel staff who confirmed his booking in person. Surprise!

It looked like Todd and Billy might finally break the seal, so to speak. But Todd's stupid joke made Billy back off. Maybe Todd is right, maybe Billy is scared to get into another relationship and is picking up on anything he can to make excuses. At least Todd seems to be taking responsibility for his own actions. Eva encouraged them to get their heads together and talk it out and they did. Awww. It also had the effect of breaking that seal I was talking about and they were up them stairs! I think. Or maybe not but Todd ended up with his bags in hand on Billy's doorstep after that row with his mother over Phelan. Billy didn't look too sure about that and it sounded like maybe they hadn't taken it to that next level. I'm confused. 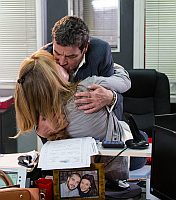 The strike is still on. And they're still trying to figure out who the spy is. Johnny refuses to reveal who is was and is digging his heels in. He's not giving in! Aidan tried to negotiate with cakes and double pay to finish the order. He even picked the fanciest cakes and Izzy was the first one to crack, at least with the cakes. Jenny decided to run inside on an excuse and at least three of them agreed and then asked to get off early for Craig's birthday. Jenny was updating Johnny and Aidan and everyone else caught them in a snog. Busted! The Truth is Out There!

They all know Jenny is the spy and she's going to take some stick for it. Aidan is determined not to trust Jenny and it's for sure the rest of the workers don't.

And Aidan is still looking for excuses not to move in with Eva. She thinks she and Aidan will have the whole flat to themselves but things aren't looking good between Nick and Leanne. They certainly had the office all to themselves and that might have changed his mind.

Audrey's salon is nominated for an award. At least Caz making tracks looking for a job so Maria's helping her. They got a bit squiffy over a bottle of wine and it looks very much like Caz is developing a crush. Gail is expecting Michael to move back in. Wonder what the eta is? In the meantime, she found David's bloodied hoodie in David's room, the one he supposedly binned. She's back to worrying al over again.

Liz is giving Steve the silent treatment for trying to kick her out of her own pub (but it's Steve and Michelle's name over the door even if she did put in an investment). Then Leanne gave her a hard time too. She's going to crack, is Liz. She's going to end up shouting it from the rooftops! I want to be there when it happens! Maybe the realization that it really would break up his marriage will pull Liz back from the edge.

Nick and Leanne are looking at baby names, first and last, and bickering over dinner guests. But his request for them never to keep each other in the dark has jiggled her guilt and she admitted it Steve was the father and that Steve knows and Nick did not take it well. It gets better. What's he going to do when he finds out Michelle is pregnant, too? He has nightmares of Steve wanting to be involved, of Steve's presence always there as a reminder. He's right, too. It's a nearly impossible situation. Poor Nick. He seems to be the new version of Curly Watts, Loser in Love. I can see his point, I really can.

Nick is not a happy bunny this morning in the aftermath of the revelation about Steve. He's maintaining radio silence with Leanne and has decided to confront Steve in his typically vile Nick way. He took Steve to a deserted area and threatened him, and pretended to text Michelle that Steve was Leanne's baby daddy. Of course he didn't actually do it but it put the fright into Steve. If i was Steve I'd be sorely tempted to clock one on Nick's jaw. 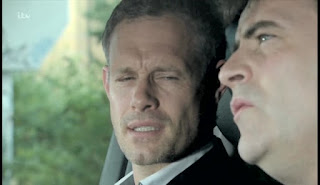 Nick can really be a low life sometimes, controlling and vindictive. I know he's afraid Steve will want a relationship with the baby but he had no right to insist that Steve move away. If that's how he feels, then Nick should move. He was ready to leave with Carla after all. And what a hypocrite!! He's calling Steve out for that one night stand which both Steve and Leanne regret and call a mistake. Hey Nick, remember Kylie? Your brother's wife and you didn't know for sure if her baby was yours or not, either.

And all Nick wants is his name on the birth certificate? Really? So his next move is to book them a holiday *and* pack for her. Arrogant sod. I really can't see Leanne and Nick going the distance, can you?

Lauren seems to have stepped up the tirade against Bethany. Surely that teacher overheard Lauren from around the corner. She wasn't whispering. But Gary came into the school to report Lauren. Wasn't he a hero with the school head!

Sarah saw Bethany talking to and thanking Gary and leaped to the wrong conclusion. But Bethany has to go to a school meeting with Lauren and her mother and is dreading it. She doesn't want to tell her mother but Gary's insisting except when Gary realizes Sarah thinks he's up to no good with Bethany, and when Bethany realizes what Sarah thought, she confessed. She did the right thing and she apologized to Gary so now Sarah can defend her chick and she's asked Gary to come to the meeting for support.

But Sarah has a habit of speaking before she thinks. How did the meeting go? As expected, Lauren tried to blame it all on Bethany when you know very well her mother had already known she was bullying Bethany months ago and wasn't surprised. In the end both girls got suspended and it didn't sound like anything was actually resolved.

Why does Wushy Steve always get a break? I like this Nick.