Watch: Sue Nicholls - This is Your Life 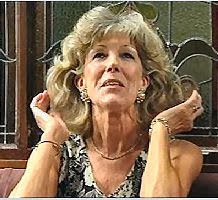 It's an old one but a good one. Does anyone know what year it was from?

Michael Aspel was on the set of Coronation Street when he surprised Sue Nicholls with his big red book for This is Your Life.

Michael surprised the actress who - at the time - had been on the street for 36 years playing hairdresser Audrey Roberts. Off-screen Sue Nicholls is married to Mark Eden who played the infamous Alan Bradley, father of Jenny.

We hope you enjoy watching this.