One villain, one apprentice villain and two gullible women 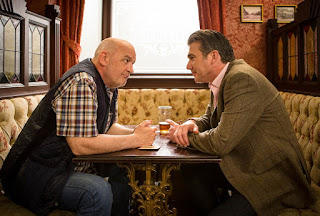 (This post was originally posted by Ruth Owen on the Coronation Street Blog in August 2016, reposted with permission.)

I'm partial to a villain. At a distance of course, but I must admit to a predilection to watching the machinations of a bad boy or girl. For a villain to be truly villainous he/she depends upon a certain personal charm, an ability to inspire trust, plus excellent lying and cheating skills. A villain cannot have much of a conscience either - a strong moral grounding would derail them. To be thoroughly effective they must use their personal charm and other villainous essentials, on a person who, for whatever reason, is gullible; made to be so by the villain.

In Phelan we have a man who exhibits all necessary villainous credentials. Leaving aside Anna Windass, Phelan does seem capable of charming several women. Sally seems to have fallen for his charm, and that, despite her determination to be the best and most influential  female politician since Angela Merkel. Eileen too is well under his spell. There was once a brief moment when she looked as if she might doubt him, but that swiftly passed.

Astonishingly, Jason gives the ok for his £60 grand plus to be released to Pat Phelan. Incredibly, Jason's mother, Eileen, goes to the bank to release the money. Are they stark staring mad? Or do they really trust Phelan with their money and their livelihood? Well, it seems that they do trust him, so that is enough for Phelan to go ahead with his swindle. What mother in her right mind would withdraw her son's hard earned money to give to a man she barely knows? And I thought Eileen was supposed to be a woman of sound judgement, wisdom and life experience.

As for Caz, she has gone from an inconvenience and a liar, to some pretty nasty plotting. And who is her side kick? Is it her brother, a friend?  Judging from the looks and glances exchanged between them they are clearly in cahoots. Caz has wholly exploited Maria's kindness in allowing her to stay. There is the burglary, the attack, the phone calls and the stolen watch that Liam found in Caz's bag. Then the pathetic reasoning as to why she forgot to tell Maria that she had found Liam's dad's watch, nor could she remember where she found it. Maria - get rid of her sharpish! Maybe Maria is now more aware of Caz not being all she seems. She did ask Caz to leave, but then, out of fear, asked her to stay.

Perhaps it is the case that Maria is not exactly gullible, but more a soft touch - there is a nuance of difference between these two positions.

Because this is soap opera, both Phelan and Caz will be found out. Tim and Todd are both aware of Phelan's intended treachery, and maybe, the whole Caz threat will be thwarted by hero Luke, resulting in a reconciliation for Maria and Audrey's favourite boy.

And then of course, there's David and his revenge...