Whatever happened to the Coronation Street battle-axe? 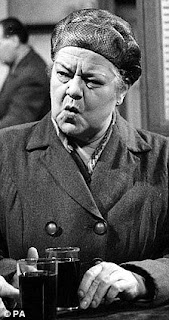 (This post was originally posted by Clinkers (David) on the Coronation Street Blog in August 2016, reposted to this blog with permission.)

What the world needs now is a feisty old bag who says what she means and means what she says. Forget Angela, Hillary and ... err, Theresa. Let's think less global and more cobble. Corrie is currently turning a corner and a welcome change of direction it is too. There are new friendships and alliances, a little less of the drudgery and a bit more fun. However, there is a harridan-shaped hole in Weatherfield.

Every drama needs a mouthy moral majority, laying down the law and not being afraid to do so. In Corrie though, these ladies have been few and far between. They are a rare and wonderful breed, eclipsing the status of backstreet bitch, gossipmonger or fishwife. In reality, the show has only offered up two legends of this ilk and what a pair they were - Ena Sharples and Blanche Hunt.

Ena's brand of wrath was carefully crafted during two world wars and a recession. Religion and morals guided her over the years and helped armour-plate her against whatever life could throw at her. No smart one-liners from Ena. Just a rapier-like delivery of whatever she was dishing out that day. Every battle-axe has their weak points though and for Ena there was a catalogue of handbag fights, name-calling and very un-Christian like behaviour. Few took her on. Elsie Tanner was her regular nemesis for twenty years but she also went to war with Annie Walker and Hilda Ogden amongst others.

Blanche emerged from a different background. She was widowed at a young age and single-handedly raised a wilful daughter. Blanche turned her hand to whatever brought the money in be it as a barmaid, a corset-fitter or a shopkeeper. Early Blanche was a bit of a good-time girl, friendly ear to chew and popular. Twenty years later she had morphed into the un-PC, tough-as-old-boots biddy with a penchant for other people's funerals and caustic one-liners. Blanche also had a vulnerable side and that kept her from becoming one-dimensional, something that obviously wasn't passed down the line to Tracy luv. 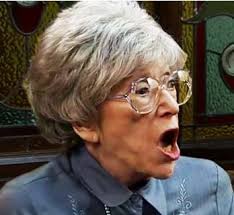 There were other pretenders to the throne. Granny Hopkins, presiding over the Corner Shop in the mid 1970s, proved to be little more than nasty. Phyllis Pearce was touted as the 'new Ena' when she first appeared in 1982 but settled for being a gruff old dear with an eye for the fellas. Well, one fella. Maud Grimes shone brightly for a while, another hard woman but importantly, not embittered. Roy's mother Sylvia was wonderful but sadly wasn't around long enough to make a lasting impression.

There were encouraging signs that Deirdre was in the process of picking up the baton from her mother. Not to be. Looking around the current crop of likely characters . . . well, there are no likely characters. Rita lost all of her spit-and-vinegar after Len died and she re-invented herself as Mother Earth in a toffee shop. Gail's too busy nursing Nick's Oedipus Complex, Liz is too flighty and Eileen's a bore. Yasmeen might have a few battle-axe tendencies, likewise Sally, but overall they are decent women. 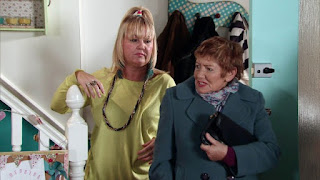 There were high hopes that Agnes Tinker, Beth's grandma, might have been a stayer. She bobbed around for the wedding episodes, returning later to visit Sinead in hospital but that was that. Likewise, the appearance of actress Beatrice Kelley in 2014, as Michael Rodwell's aunt provided a tiny spike of anticipation but the character was temporary and quite mild-mannered. Maybe ITV should have snapped up Lynda Baron, glorious as Violet Carson in The Road to Coronation Street but alas, she's now doing something in Walford.

Does Corrie need a fearsome older woman patrolling its cobbles? I think it does.