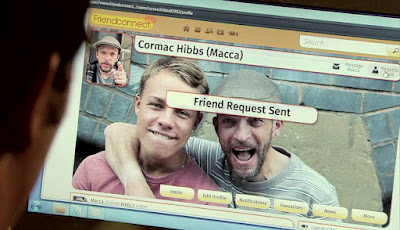 Revenge award: David certainly wiped the smug off Lauren's face, didn't he? Now he's contacting Macca via social media under a false name. (Cormac Hibbs? Wonder how long it took them to come up with that name!)

Cheapskate award: Does Norris really peg his teabags out to dry? I wouldn't put it past him.

Mixed messages award: Maria invited Luke to the salon awards do. No wonder he got the wrong idea.

Walking Dead award: OMG Andy looks so good done up like a Zombie!!! I never expected to see a Zombie on the cobbles.

Monday, not Moanday award: Looks like Luke's weekend was better than expected! 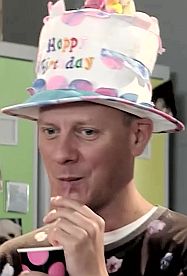 Bleedin' Obvious award: "Happy Birthday, Sean" "You remembered!" The hat was a giveaway.

Quick turn around time award: Faye posted a letter to the prison on Saturday. Monday morning's post seems to contain a visiting order.

The Boy Who Cried Wolf award: This time Sean is telling the truth, he isn't the snitch, but Billy didn't believe him.

Predictable award: Beth is still married to Darryl the Rat (the unfurry one, that is). You could see that coming a mile away.

Lines of the week:
Sean "I'm turning 40 on Monday and living with a man who pegs his teabags out to dry" (when you put it that way...)
David "I wanna stay angry so leave my stuff alone" (It's not about moving on, luv, it's about finding a new normal)
David "We give our clients everything they want. No, what we do is give them everything they deserve" (and he's back!)
Caz "I never thought I'd feel like this again" (and that sounds like more than just 'I had a great weekend')
Todd to Billy "One day will be too late. And then you miss out" (that's true)
Sean "There's no point in being old *and* bitter" (you're learning)
Audrey to Maria "Maybe it's something you give off. You do seem to attract the gays, don't you? No offense, Sophie!"
Michelle "You know what they say about narrow minds and wide mouths, don't you?"
Kevin "I looked like Magnum P.I. in overalls!"
Billy "It's one thing being open minded. It's another thing facing mutiny in the flock|

I also wondered about Cormac Hibbs so I tried to anagrams it but the best I could get was Bicarb Schmo.