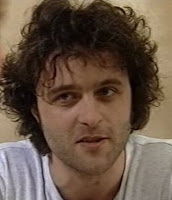 Last week, I posted about Nick Tilsley and his passive aggressive nature and mentioned that he set Leanne up with the killer of his father, Brian. In the comments, someone asked about it so I thought a "blast from the past" post might be in order.

Thanks to Corriepedia and Corrie.net for the details, here's the story of Darren Whately.

Brian Tilsley was surrounded by yobs outside a Manchester nightclub and stabbed by one of them. That person was Darren Whately and he was convicted of the crime. Years later, Nick, Brian's son, was about 17, was newly returned from Canada and attending a local college. His class had a session from a man who was incarcerated and had been tasked with talking to students about how prison was a Very Bad Thing and they should avoid doing anything that would land them in it. He told the students he very much regretted what he'd done and regretted the hurt he caused Brian's family. Nick realized that the man was the one that killed his father when Whately described his crime, and became a bit obsessed.

He was married to Leanne at the time and persuaded her to write to Whately in prison pretending to be a penpal in order to find out when Whately was going to be released. She did so reluctantly and they had a bit of a correspondence at Nick's insistence, against Leanne's better judgement. She decided she didn't want to continue but Nick was adamant and wrote a letter himself, even sending Leanne's photo! 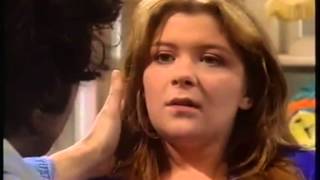 Whately was released soon after and came looking for this lovely lass he'd been writing to. Uh oh. Leanne didn't expect that because she hadn't realized Nick had kept up the correspondence in her name and kind of freaked out. As you would. She and Nick were living with Ashley at the time and he came home and was able to oust Darren from the house but Darren promised to return. Leanne freaked out even more, and, blaming Nick for putting her in the sights of a former killer so he (Nick) could get close enough to get revenge, walked out.

Whately lurked around the neighbourhood and once, in the cafe, overheard Gail talking about Nick and Leanne and realized they were trying to set him up which set him off. He tracked down Leanne and threatened her. Nick manly broke in the door but wasn't manly enough to really do much more than that and Darren walked away because, as he insisted, he was a changed man and wasn't about to harm anyone.

Nick and Leanne reconciled though she still felt nervous with Darren still out there at large so they went to the police and since Darren was only out on license (parole), he was banged up again. Even though he might have been able to be released because Leanne had written him letters previously, Nick insisted that was the end of it. Nick had his revenge after all and Darren Whately went back to prison and was never seen around Weatherfield again. 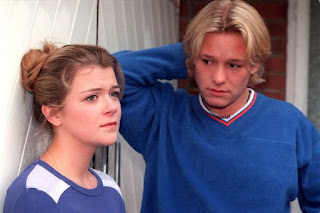 Nick and Leanne's marriage limped along a short while longer but when Leanne fell pregnant, Nick insisted she have an abortion. She did but was then angry that he told people she miscarried, Nick clearly not wanting to take the responsibility for what happened. Their marriage cracked and broke. Nick suggested they move to Canada but Leanne no longer loved him and he went on his own. Leanne managed to get a bit of money from Gail as a settlement on moved on.

Thanks for reminding everyone,
since the writers seem to have
forgotten the living hell NIck
put her through during their short
but passionate marriage, and why
Leanne and Simon should run, not walk,
for the hills.