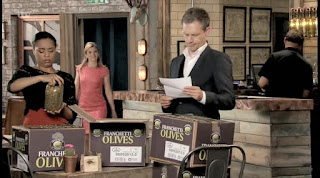 Olive my love award: Several years on and olives are still being mis-ordered somehow! Best long running joke ever!

Continuity Fail award: A few months ago, all of this angst over the Bistro and Leanne would have had Nick's newly recurring brain injury symptoms giving him temper tantrums. Now it's disappeared again, seemingly vanished in a puff of smoke. Perhaps that really does happen but it smacks of a handy plot point to pull out just for drama's sake.

Contrived Cliche award: Aidan and Maria have really hardly exchanged a friendly word up before, yet they're unloading their angst about their partners on each other and having revenge sex. Could the writers not think of anything else?

Musical ambiance: the Doobie Brother's song Long Train Running (lyrics: Without Love, Where would you be now?) in the garage while Aidan was trying to persuade Luke to work things out with Maria.

Glamour Girl: Gemma is in head to toe gold, including the shoes and short shorts!

Presumptious award: Steph suggested Eva and Aidan join Maria and Luke because the Bistro was full up. You know. Because they're all bessie mates. Or something. Geez.

Dropped storyline: By the way, is Maria still legally married to that Pablo? She must be.

Passive Aggressive award: Nick. And he's taking great pleasure in loading the guilt on Leanne, and then watching her get jealous when he flirts with the hens.

Get Over Yourself award: Did Maria harbour a secret crush on Aidan or something? It wasn't obvious if that's the case. She's acting like he used her with that one night stand. I'd say she used him just as much. She needs to drop the attitude. 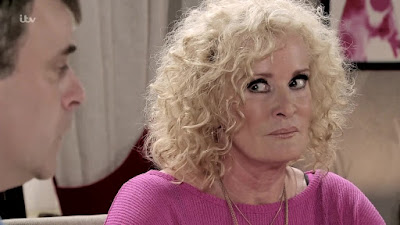 New do: Liz went all curly. Not sure it suits her.

The look that says "I don't believe you for a minute"

Make it stop award: Another contrived plot point: I totally refuse to believe Craig would ever humiliate Bethany by posting that photo online or even take it in the first place. I'm sure she can find plenty of reasons to neck diet pills without that happening.

Seven Year Itch: Revelations of Sharif's 7 year affair sure came out of nowhere and then after we heard how much he loves his wife, has no regrets and has planned a bucket list trip across Europe for her.

It's all about Me-chelle: Surely Steve's questions for the doctor are every bit as valid as any Michelle might have but she obviously didn't think so and rudely interrupted him.

Nick "The Flash" Tilsley was able to get into the city center through traffic, park, and get to the bus before it left and all that *after* Leanne told Simon "it's not long now" (before the bus was due to leave) and Simon texting Nick.

Risqué Business award: Sharif is taking long lunches and meeting someone down by the canal and we all remember what kind of shenanigans married men can get into down at that canal, don't we? Later, after the revelations of the affair, Sharif and Sonia cuddling in the kitchen with Yasmeen upstairs!


Temper, temper: Loved that they got the little one that plays Lily to look all angry! What a little star! 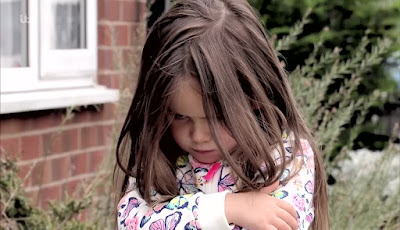 Lines of the week:
Gemma "All I need is some ancient old wrinkly to get my mitts on and give them some Gemma magic!"
Luke "I hate it when young people sing old people's music to look cool"
Sally "I'm getting very good at soundbites actually. I've been working on them" (Ha!)
Sally "Politics is a very dirty game. I run that risk everytime I step out of the house"
Audrey to Gail "Your elderly mother could go off you sharpish"
Gemma "I want a CV that's longer than my charge sheet"
Audrey about Gemma "Bless her, she's like Mother Theresa with chewing gum and a fake tan"
Sally "The last thing any man wants to do is get tangled up with Maria Connor"
Norris "And remember, I don't do gossip"
Robert "I am trying to educate the palates of Weatherfield"
Simon with sarcasm "Oooh. I may need to go to A&E, my sides are splitting"
Michelle "Tell him my window of fertility won't be open very long" Tim, leering, "Hey, I could lend him my shammy" (yes, i know it's chamois)
Steve "Don't worry about the fare because I'll sort it" Leanne "Yeah. but maybe keep the fist pump until after I've gone, yeah?"
Yasmeen "45 years married to him and you wonder why I'm crying!"
Nick "Have I got Mug written across my forehead?"
David "The thing is, brother, life's a bitch" Nick "So what's the point" (the point is you grab happy where you can find it for however long you get to keep it)
Leanne "I thought you probably would have moved on by then. Met someone" Nick "Like who?" Leanne "Like someone that's got a lot less baggage than me" Nick "I'm not exactly traveling light, am I?"
Yasmeen, going out the door "I won't be long. Look after her" (So that's you given permission, then!)

Now we know why Sarif needed an allotment plot and no wonder we never see him there anymore!