I'm no great fan of Sean but even cynical old me raised a smile on his behalf when he asked Norris about his spare room on Coronation Street.

I think this pairing could work as lodger and tenant.  Not least because Sean and Norris are, at first glance, so very different from each other and could easily wind each other up.

But look under the surface and the similarities are there between these two men.  Both are lonely, both can be nasty and both are as camp as Christmas. It might just turn a bit vicious... 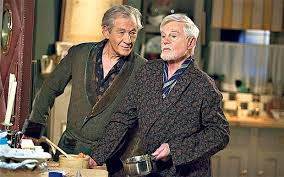 I'm still hoping that one of these days Norris will come out of the closet. Perhaps with Sean moving in to live with him while Emily is in Peru* we might see a softer side to Norris. We know it's there, he just keeps it well hidden.