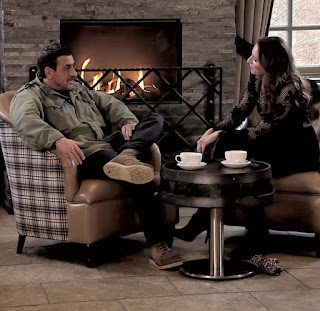 You Old Charmer award: Peter. In the mood he was in, the idea of chauffering a beautiful woman around was just the trick, no pun intended. He poured on the charm but ended up walking away from temptation.

Hoist by his own Petard award: Adam was forced to sign away his rights (again) to the factory for one pound! Love it! Ken was right, he was motivated by greed, not a true wish for his birthright. Nicks's grand plan to remove Leanne from the father of her baby and from Peter's influence backfired badly. And Peter's far more of a threat to Nick's insecure little life than anyone else could be.

Gold Digger award: Jenny. She might not be one technically but if Johnny were not at least comfortably off, she likely wouldn't have looked twice at him.

Got his Number award: Yasmeen told Cathy that Brian is a fool. Nailed it.

Greedy Guts award: Kevin. Sally's money takes some of the pressure off but does he refuse Anna's offer of trying to sue David? No, No he does not.

Philosopher King award: Tim. Men and women are like cheese and pickle. Love it!

Control Addict: Where does Alya get off getting snotty with Jenny for her developing a new mastectomy bra without permission, using a few scraps of material and doing it on her own time?

Lines of the week:
Nick to Toyah "This is happening whether you like it or not. So you can be part of the
problem or part of the solution, it's your choice" (obviously realizing his decision is
going to take some convincing)
Daniel to Adam, quite gleefully I might add "Let me get this straight. You got played by a woman!"
Luke to Tracy "I like you!" (and you know, that's a very important thing in a relationship)
Nick "I don't respond well to threats" Peter "Then consider this a promise" (Peter 1, Nick 0)
Freddie "You two have been mates for years" Tyrone "on and off. Obviously, things got a bit tense when he got me wife up the duff but apart from that..."
Tracy "We were friends with benefits. But then we were never friends, were we?"
Peter about Nick "I love it when he makes that disapproving face and he's got a mouth like a cat's backside"
Brian "Me nan made me a snake out of old tights"... "He was more than a stuffed toy to me. He represented optimism, hope. A world of possibilities" Audrey "You get all of that out of a snake made of tights?"
Nick "Are we playing Interview Bingo here?"
Jenny "It's hard to smile when you're being called a gold digger. Who d'you think you are? Kanye West?"
Tim "That's not chalk and cheese, that's cheese and pickle. Different, but complimentary"