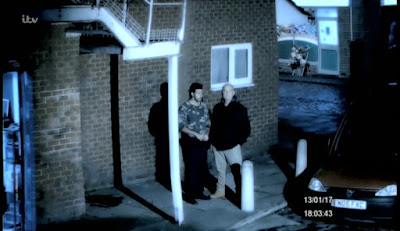 Salt in the Wound award: Poor Michelle. After everything else, the first person she sees when she gets home from hospital is a pregnant Leanne.

Emotions of a Stone award: Adam and Nick but especially Nick. No compassion at all unless it's all an act but if he's scared and jealous, it only makes his attitude even more contemptible.

Close Call award: Phelan was jacking open the garage door only to find Luke and Tracy behind it, she just tying her coat belt over ... well, nothing, from what it sounded like, and Tracy freaked out that it was caught on CCTV!

Cocktail award: Sinead was drinking lager with marachino cherries. Is that a thing now? Beer with sweet fruit in it?

Continuity Fail: Bethany was doing hair and makeup for a school friend only last week, she told Nathan she didn't have any friends.

Stuck in the Middle award: Liz. She's got her son one one side and she knows a lot more than she can tell Michelle who is on the other side hating him but grieving, and Liz knows how she feels, too. 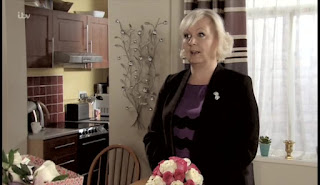 Wedding Fashion Fail: Eileen was meant to buy a new wedding frock. What she ended up with looked nice but it doesn't scream "wedding" to me.

That's you told award: Looks like Tyrone still harbours a bit of resentment towards Kevin for the affair with Molly after all.

Lines of the week:
Phelan "I was planning to rip them off, but I didn't get the cash" (And right there, is the incriminating statement!)
Gemma to Chesney: "Rita's got more life in her than you have!" (She's right, too!)
Phelan to Andy "I'd appreciate it if you would burn down Kev's garage"
Steph to Kevin "I don't know a steering rack from me big end"
Tim to Sally "You know what? You're the best bird I've ever had" (Such a romantic!)
Kevin "I think someone's got a vendetta against me" (and you can't think of *anyone*?"
Kevin "I may have to rob Peter to pay Paul" Luke "Yeah, but who's going to pay Luke?" 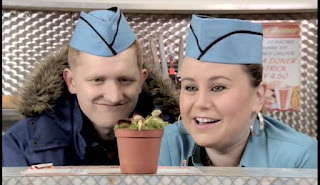 Steve "I can't believe I'm having to explain to Peter Barlow how two sad and lonely people can have a sordid night"
Tyrone to Luke "You never told me your sister were clever" (well, it's only common sense and you could have figured it out yourself, you dolt)
Sally "I've got needs, Tim. Needs!"
Chesney about the dead Flytrap "Maybe something disagreed with it" (chili sauce, perhaps?)