Pics: When Coronation Street turned into a comic strip 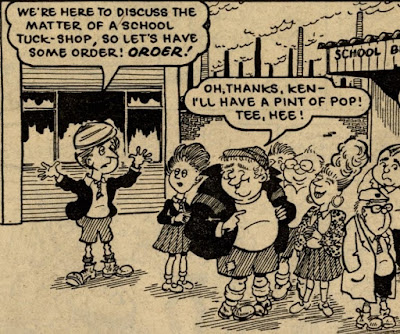 Eagle-eyed Coronation Street fans may well have seen this before but it's well worth another blog post.


In the 1980s School Fun comic, Coronation Street School was re-imagined with the cast in shorts, skirts and ties and took them back to the classroom.

Episodes often started out with the youngsters noshing crisps and pops in the Rovers Return Tuck Shop, run by young Fred Gee, and would spread to the playground, classroom, sports field and the occasional field trip or visit to the Wetherfield fairground.

A range of different teachers appeared in the story, none of whom seem to be based on anyone in particular. However, there were occasional clashes with the Canal Street Gang – a rival outfit – who initially bore a surprising resemblance to Sidney, Smiffy and Wilfred of The Beano’s The Bash Street Kids (although they were first referred to as ‘the tough Bloggs brothers’). In later appearances, the characters who first appeared to be Sidney and Smiffy had swapped shirts, and the Wilfred-like charater’s jumper wasn’t rolled as high, possibly as the inclusion of DC Thomson characters was deemed unwise. Perhaps if Eastenders had been around at the time we may have seen a young Dirty Den, Ian Beale and Nick Cotton instead.

See lots of fun images on the blog: Great News for All Readers

And if you like all of that Corrie comic stuff, then you're going to LOVE THIS

Email ThisBlogThis!Share to TwitterShare to FacebookShare to Pinterest
Labels: artwork