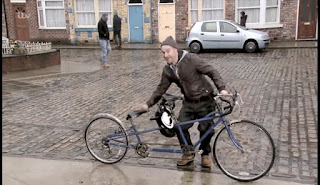 Have We Met award: Tim and Sally and the Tandem. You got to give him points for trying.

No Clue You: Chesney can't undersand how they could split up over a plant.

Walking on Eggshells award: Everyone is walking on eggshells around Michelle because you don't know what kind of reaction you're going to get. She needs help and she needs it now.

Reality check award: Peter and Nick just couldn't stop ripping each other apart until Simon ended up hurt. Priorities, men. And Grow UP!

Determined award: Michelle had to climb up a tall circular staircase and then up over some sort of embankment, in heels, to get to the edge.

Nose out of Joint award: Nick who bought a Moses basket for Leanne on the same day Liz gave her the one she bought for Ruairi. Thus, it put our petty boy's nose out of joint.

Open mouth, change feet award: Fiz's off hand implication that Michelle was still young enough to have another baby really was a very embarassing faux pas even if it was unintentional.

Grace under Pressure award: Wasn't Leanne kind to Liz? Alya helped Aidan and Johnny stitch up Adam. The whole job title argument and subsequent complaining was all part of the plan to suck him in. 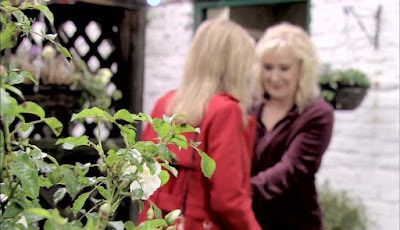 Lines of the week:
Phelan "I'm sure you can understand my not insignificant annoyance"
Phelan "Better men than me are ten a penny"
Ken "I want to live, or be remembered as a man who lived"
Eileen "So far, being married sucks!" (you just wait! You certainly could have picked a better'un!)
Phelan "Deep down, I think I'm a good man. At least I hope I am" (Lies like a rug or is he really that delusional?)
Robert to Michelle "If you live, he can live" (oh well, why didn't you say so before now?)
Phelan to Luke "Some people are very convincing" (You're looking at one of them)
Adam to Alya "I don't bite, I just sue"
Amy to Tracy "You know, you're officially a cougar now"
Roy "Love doesn't allow for objective rationalization"
Tracy "This (birthday) is worse than my 30th" (Yes, getting convicted for murder would quality as the worst birthday ever, I think)