What's Up With Adam Barlow? 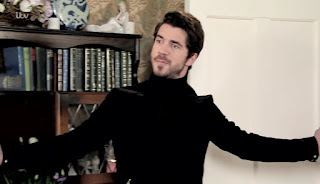 Reposted from State of the Street with permission

I don't like Adam Barlow. I never did. He was whiny and petulant in his first stint on the street and he's arrogant and sneaky now. I applaud that they've brought him back to flesh out the Barlow clan. It's clear that Adam has some sort of agenda or secret and I look forward to finding out what it is even if Adam will never be a favourite character of mind.

Adam is the son of classic character, Mike Baldwin. Mike was arrogant and a business force to be reckoned with. When he got knocked down, he always managed to come back. He was a womanizer, and he had a cheeky grin, especially when he was winding up a rival, knowing he would have the upper hand. He usually did! Adam is trying to be like his father, I think, but he's a pale imitation. Mike always had the edge of a survivor, having brought himself out of a less than priviledged childhood. Adam is missing that, he's never really wanted for anything and he certainly has an air of entitlement that a lot of spoiled children grow up to have, especially on soaps. 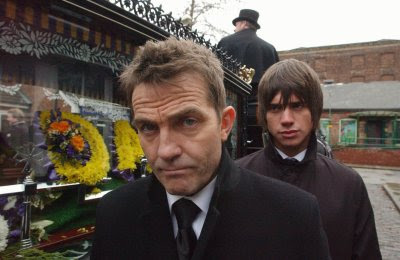 When Mike died, his illegitimate son Danny got his hands on the factory but there was a newer will which divided the factory between Danny, Adam and (I think) Mike's other son, Mark Redman. Not sure about that third heir because he had fallen out with Mark over Mark's affair with Mike's wife, Linda. Leanne was the one that handed Adam the current will in the end and Adam then owned half of Underworld.

However, he and Danny didn't get on and Adam really didn't want to be bothered with the factory. In a fit of pique against Danny, he decided to sell his share but not to Danny. He was approached by Liam Connor who was in the rag trade with his brother Paul who would provide the financial backing. The Connor brothers conspired to undercut Adam's asking price with a bit of deft handling. They managed to get the factory for just over half what Adam wanted but after another row with Danny, Adam (who was legally an adult, not a minor) signed and walked away.

Here he is back on the street. He lived in Canada where he apparently became a lawyer. He was quite ill a few years back and Grandad Ken went to take care of him for nearly a year. Now he's back, recalled to the family compound after Ken's stroke. But there's something off about him. He seems to be broke. Strange state of affairs for someone that was a lawyer, you no doubt think. I know I did. He started off straight away scamming a rental car company when he arranged for his car to be stolen and sold. He conveniently avoids buying Christmas and birthday gifts. And in the past few weeks, he's been intent on claiming his birthright to the factory.

You may be as surprised as I was to hear that. Adam never showed any interest at all in all these years. Ah, but there's the rub. He's after a settlement, not after his share of the factory, claiming he was young and foolish and deliberately ripped off. All of that is true but he was an adult and he made his own mistakes. Did the Connors take advantage of him? Yes but he was stupid, too. He was too anxious to get one over on Danny. Now he blames the current Connors but they had nothing to do with it. 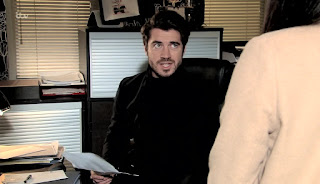 There have been several owners and partners of Underworld in the past 10 years of so, including the ferocious Carla. I can pretty much guarantee that Adam wouldn't be left standing had he been trying to get a settlement out of her! She'd have had him for breakfast. Johnny and Aidan are just as savvy, and with Alya's help, set up Adam for a confrontation and a convenient blackmail scheme. His attempt to steal documents from the company's computer blew up in his face and his bid for cash was shut down triumphantly.

Just as an aside, however, regarding Adam's assumption that he could get his hands on pertinent documents, either via the computer or even the filing system.  Remember, Adam signed off on the factory 10 years ago or more. Would the exact same computer still be running? I think not. Very likely they're on the 3rd or 4th computer since then, what with software upgrades etc. Don't forget, the factory has also had numerous fires which would cause possible meltdowns or at the very least smoke and water damage.  If the paper contracts were stored on site, it's likely they would be ashes if not in a fireproof safe with the digital backups if that was something they had a chance to do before any damage was done.

Whoever the original solicitor was probably has a copy, that's where Adam should have gone. And having said that, why wouldn't they have given Adam a copy of the document he signed back then? Legally there would have been two documents, one for each party to sign.

Ken was right. It was all about money, not his birthright. He sternly disapproved and Uncle Daniel was amused that Adam, the cocky and irritating relative, has got his comeuppance. Adam really hasn't got any smarter has he? Now Adam seems to be honing in on Ken and his will as the next possible avenue to money.

I don't know where this is going and I do wonder why he's so skint.

I don't like Adam either, but his upbringing was certainly less than ideal, so it's not surprising that he thinks the world owes him. As for his lack of funds in spite of being a lawyer, if he was born in 1988 then he couldn't have called to the bar for more than a year or so, and he was supposed to have been ill for almost a year, when he was nursed by his grandfather, [in order to explain William Roache's absence from the show,] so he's hardly had time to acquire any money. Also, it's never been explained how he paid for all that expensive Canadian higher education. If he was ripped off by the other Connors, he wouldn't have had much left of his inheritance. He can't practise law in the UK until he writes the bar exams there and it sounds like that may be a problem. Both he and Daniel should be studying and they don't seem to be.
Calling the new law firm "Black Sheep" seems appropriate for Adam and Todd, since that's how they both see themselves.