Another Corrie Wedding Bites the Dust

Tonight was the rather rushed wedding of Chesney and Sinead. I say "rushed" because it was Chesney that pushed for a quick wedding and it's one he lived to regret.

The Bride and her ex-lover exchanged regretful glances when she was on the way to the registry office and Chesney, after already jumping when Joseph referred to Sinead as his new mum, saw it and thought the worst. Chesney is the person most in need of a self esteem boost, more than anyone I've ever seen. It's his Achilles heel. He comes by it honestly, having been brow beaten by that mother of his all his young life. He decided that Sinead would leave him eventually and it would be too much upheaval for little Joseph who had already lost his mother.

Chesney is a good father, you have to give him that.It's true, the little lad was getting close to Sinead but that was the problem. If he got too attached, he'd be devastated if things went wrong. Sinead was appalled that Chesney had so little faith in her and she's right. Plus, Chesney still doesn't quite believe Sinead is over Daniel, I think. 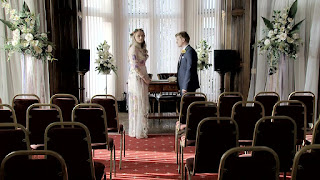 Anyway, the wedding day had some good moments, appalling fashion and  development of a few side stories which I won't go into here. I liked Sinead's wedding dress, it was very much "her". I loved all the different things Kirk wanted to say in his speech, starting with knowing Chesney longer than he's known himself! Loved Sinead's mother and nan wearing outfits that wouldn't have looked out of place on the nearest "stroll". Only Gemma could get away with wearing GANG earrings to a wedding!

I didn't much like Carla advising Daniel to break up the happy couple or to swoop in and take advantage of the carnage afterwards. I don't think the mature and evolved Carla would have done that. If Sinead had really still had feelings for Daniel, she'd have come to him so he's right to back off. I didn't like that it turns out Henry is dating Gemma for a bet though I wasn't surprised either and I look forward to her tearing him a new one when she finds out and making him look like a right idiot.

For a look at the wedding parts of tonight's double episode, see State of the Street, with lots of screen captures and fashion! (Oh those fascinators!)