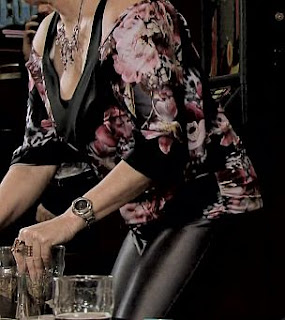 Fashionista Fail: Mother and Grandmother of the Bride. You don't often see that level of trashy outfit outside the back of Picadilly Station! Still...it made me laugh.

Talk Talk award: Anna's burning up credit on that mobile like gangbusters. Must be one of those "all you can talk for a tenner" plans. Also, why does it show up on other phones as if it's the prison calling? It's a 'burner' phone. Was it stolen off a guard or are the guards dealing in black market phones to supplement their income?

Pants on Fire award: Peter said he poured all the vodka away. Well, strictly speaking, I suppose he did. Down Billy's throat.

Musical Ambiance: Desperado by the Eagles in the pub when Adam is telling Eva he's making plans for them for dinner. Not sure why "Desperado" but the line "why don't you come to your senses.." might apply to her dating a bit of a wide boy or him dating a high maintenance woman with a lot of baggage.

Lines of the week
Tyrone "Beer and sausage for breakfast! It's going to be the best day ever!"
Kirk "I've known Chesney Brown longer than I've known meself"
Carla "I'm the worst agony aunt in the world" Daniel "That sounds like a badge of honour"
Carla to Daniel "Don't be a martyr. You'll regret it"
Sean "There'd be cows clogging up Balaclava Terrace. Pigs on the rampage in Rosamund Street"
Sinead to Chesney "You bin me off in case I leave you!? Have you any idea how pathetic that is!" (She's not wrong)
Sean "I'm more like the Michelangelo of ladies' undergarments"
Alya "You should cherish every single moment you have with Pat because you never know, it might be your last" (but not in the way she means!)
Adam "Whoever came up with this 'Honesty is the best policy' rubbish is talking absolute nonsense"