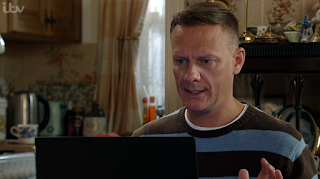 Don't employ Sean.  Fresh from being sacked from the medical centre (for shouting patient details across the cafe) and the pub (for shouting abuse at the customers), Sean needed to get a new job.  First, Carla had to explain to this forty-something man that people looking for work generally have a CV.  Then, while using someone else's computer (without their permission), he somehow performed a factory reset and destroyed all their precious data.  So that's poor customer skills, no respect for confidential information, a lack of business awareness and zero computer knowledge.  I'm sure the job offers will be rolling in. 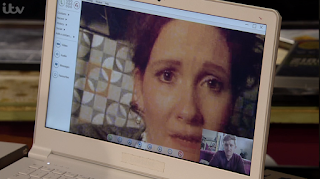 Fiz is great at doling out advice - not so good at taking it.  "Grab life by the good bits!" she instructed Chesney via Skype from somewhere in Australia Birmingham.  "You're about to have the best day of your life!"  Yes, it really is wonderful when you marry the person you love, isn't it Fiz?  Incidentally, how many years have you been engaged to Tyrone now with no sign of a wedding band? 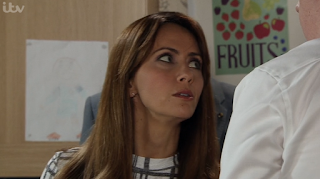 Weddings get Maria going.  Bless him, Craig went to Maria for sex advice this week, wondering how you know if a girl is "in the mood."  Resident strumpet Maria's reply, surprisingly, wasn't just "is it a day with a Y in it."  She further pronounced that weddings turn her on; what she failed to add was they usually climax with her attempting to mount the groom as he's cutting the cake. 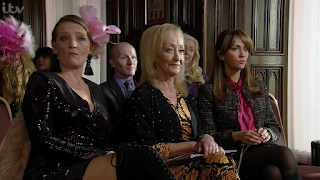 No, Do!  Don't go, Do!  Sinead's big day was a disaster on many levels, mainly emotional, but especially fashion.  Her mum wore thigh high boots, Beth looked like a disco television on the fritz, and the wedding gown seemed to be a go-go girl's minidress with a pair of Laura Ashley net curtains draped over the top.  As for Maria's 1980s power lesbian blouse and jacket, I don't know where to begin.  What wasn't a disaster was the return of Sinead's nan, the marvelous Nancy, whose star power shone in her every appearance.  Please sign up the former Doreen Corkhill as a full-time character immediately, and if you can get John McArdle in as her long-lost husband too even better. 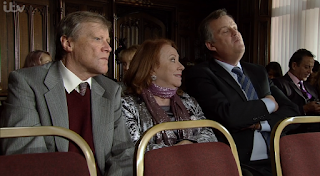 We are all Roy Cropper sometimes.  Brian was off on one of his interminable monologues about Weatherfield architecture, when Cathy revealed she liked a bandstand.  "Is it a building?" Brian queried, and I, sat on my sofa at home, said "It's a structure."  Moments later, Roy intervened to confirm that yes, it is a structure.  I will be buying a cagoule and a shopping bag this afternoon.

As a tribute to poor Luke, @merseytart has spent the last week listening to flamenco house.  It's what he would have wanted.