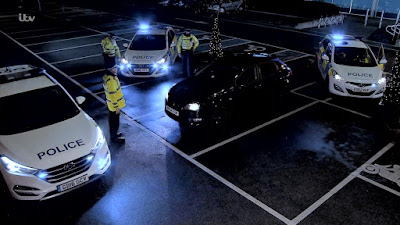 Hide in Plain Sight award: Did Anna think that parking in an empty lot and ducking down would be enough to keep the police from finding them?

Feet of Clay award: Anna stood by Kevin and bailed him out of a financial mess. When things get tough for Anna, he stuck around for awhile but the minute she can't be around to look after him and his sprog, he kicks her to the curb.

Houdini award: Anna managed to get into Roy's flat without a key. He's away, surely he wouldn't leave a key under the doormat or a plant pot, that's not his style and she went from prison to hospital to the park. She wouldn't have had the keys to the cafe like when she was working there.

Pants on Fire award: The Lodger (Chris/Paul) who was a professional thief!

Heart on his Sleeve award: Daniel.

Obnoxious award: Aidan's blaming Eva for ruining his life but it was his infidelity that sparked it off.
Musical Ambiance: Desperado playing while Toyah and Peter talk about Leanne trying find a date.

Lines of the week:
Kate "It takes more than one half wit scumbag to get this lady down" (the half-wit scumbag is right behind you, but you knew that!)
Tracy about Chesney "He's like a little ginger Usain Bolt!"
Daniel to Kate "You're not the one that everyone thinks is Sweeny Todd"
Chris "I like feeling part of the family" Peter "I'll introduce you to my family. You might not be so keen then"
Billy about Eva's skimpy costume "She might be Rudolf the Red Faced Reindeer if she gets a bit carried away with her dancing" Adam "I suppose I could pop in" Daniel "On the off chance that she pops out?" (Boys!)
Tracy "I was never allowed any pets. What did they think I was going to do? Torture them?" Steve nods.
Daniel "How man other two faced con artists to you know?" Dev "You'd be surprised"
Eva to Aidan "Neither of us are going to win Hearts of Gold award are we?"
Phelan "How difficult can it be to find a middle aged waitress with bad legs?"
Daniel "Lessons in spite with Tracy Barlow!"
Daniel "Can we just be civil?" Tracy "I'm not even civil to people I like!" (true, that!) T
racy "If I'm in a club and I fancy a bloke, d'you know how I get him back to mind?" Toyah "Chloroform?"
Robert "Michelle. It's gone. What d'you want me to do, have a funeral for it?"

From the "What goes around comes around" department:

I hope Kevin's words stung and
hurt Anna as those same words
stung and hurt Owen when she
said them to him (except that
she wanted Owen to still be available
as her personal unpaid handyman).
I"m surprised Kevin didn't say that
she could still come and do the cooking
and cleaning for him and Jack ;)

Kevin is a jerk. Time for him and the never seen Jack to move on.