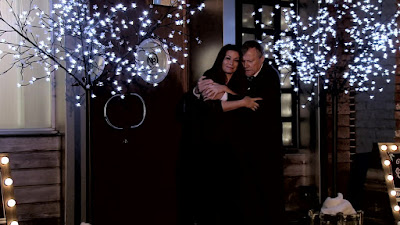 The Street was in a bit of sad state of affairs this month. Not a lot of Christmas spirit at all. There may have been happy familes and excited kids but we barely saw any of them at all. There were plenty of scenes with Billy who has transformed from Vicar to Martyr over his involvement in the death of Susan Barlow those many years ago when he didn't insist that the driver of the getaway car he was in stop and help the injured woman after they crashed into the other car. He finally confessed to Peter and it all went even more pear shaped than a pear shaped thing, ending up with Billy at the bottom of a cliff.

Daniel and Chesney are each trying to show Sinead that the other is not worthy of her heart. She's back together with Chesney but there are still occaisional longing glances she's sending Daniel's way while planning her wedding to Chesney.

Gary's dead and then he's not and he and Sarah have broken up, yes, again because she knows he got someone pregnant. I didn't think she knew who it was but by Christmas day it seemed she did judging from the way she was screaming at Eileen from across the road.

Phelan continued his drive to have Anna behind bars permanently. We know she didn't hurt Seb and chances are she'll get cleared for that. But she escaped custody and then assaulted Eileen. I think she's doomed.

Carla's back and she's harbouring a secret, an illness that only Roy knows about so far. While kidney donors don't have to be dead first, is this a precursor to the demise of one of her loved ones?