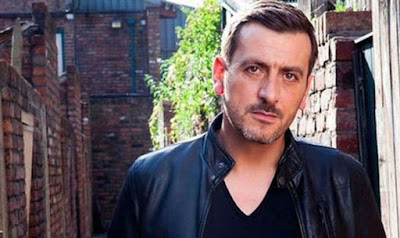 (This post was originally posted by Ruth Owen on the Coronation Street Blog in December 2017, reposted with permission.)


In early November I was invited to Media City to meet and interview Chris Gascoyne who plays Peter Barlow  He was great fun to interview and it’s clear how much he enjoys his time on Coronation Street.

What happens between you and Billy?

As you know, Billy was involved in a robbery a good few years ago. Well, now word is out that it was Susan Barlow, Peter’s twin and Adam’s mother, who died when the car Billy was in smashed into hers. Peter then embarks on some misguided revenge. He bungles Billy into the boot of his car while Billy’s thigh is bleeding profusely because a metal charm from Summer has got stuck in his thigh. In his anger at Billy,  Peter removes the jacket he had initially given to Billy to staunch the flow when he didn't know that Billy was Susan's killer, and drives off. Peter wants to make Billy feel what his sister must have felt. Peter also shows Billy photographs of Susan, just to add to Billy’s pain. Billy says he deserves to die because of Susan.

How did you find working with Daniel Brocklebank?

Honestly, we had such a terrific time. We were out in the wilds of Derbyshire, a really remote place in the Peak District, and Peter has parked the car on the edge of a cliff. Exciting stuff and a welcome break from studio work for us both.

What’s going on in deepest Derbyshire?

Well, Peter has forced Billy to drink two bottles of vodka, a bad choice for Peter who seems always just about to have a drink. The link here is that in Peter’s head it was his twin’s death which caused him to turn to alcohol in the first place, so the forcing of Billy to drink all this vodka is revenge in that Peter wants Billy to experience the feeling of drinking loads of alcohol.

Peter is a tortured soul and it’s terrifying for Billy who thinks he’s going to be pushed over a cliff, with no one to hear his cries for help for miles around.

How will Peter react to Carla’s return?

Ah, yes now there’s something else for Peter to deal with. Carla is the love of Peter’s life, but he treated her very badly. When she first arrives, he will do his best to appear unconcerned, nonchalant even, though friendly, but ever aware that Toyah might feel a little insecure knowing that Carla is back. It will be particularly difficult for both Peter and Toyah, as their surrogate, Jackie, is now several months pregnant with Toyah and Peter’s baby.

How do you feel about there now being six episodes a week?

I think it’s brilliant and a credit to the show. What it does do, now that we have over 70 people in our cast, is allow people to rest up for a while after an intense run of performances. As actors we are given the space to be more self-critical and self-reflective. Kate Oates is so good in giving us all that opportunity.

Will Peter become an alcoholic again, ever?

Viewers will witness several episodes where Peter is sorely tempted, but as far as I know, so far, on each occasion he pulls back, just in time. Temptation is right there though continuously. Even when he’s in bed at night, he could just go downstairs and help himself. He does want to prove the doubters wrong, especially his dad Ken. From my point of view it’s a relief not to have to do any drunk acting!

Any more dramas coming up in the Barlow family?

Doubtless there will be! There are several of us and so there is always that opportunity to bring out the conflict and the drama. Each of is so different. Also, each of us is his/her own worst enemy.

How do fans react to you?


Usually they react to me in a warm way. My 91 year old mother-in-law is a keen fan of the show and reads all the magazines about Corrie. She then tells me what it is I’ve been doing. My only response, is, ‘Yes, I know!’