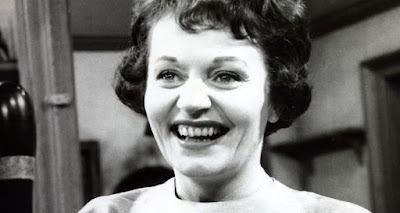 
Doreen Keogh, who played Concepta Hewitt, the first barmaid of the Rovers Return in Coronation Street, has died aged 91.

Although born in Dublin, she coached Barbra Streisand in the art of speaking in a cockney accent for the American actor’s 1970 film On a Clear Day You Can See Forever.

Born Doreen Keogh in February 1926, she left school at the age of 15 to train with the Abbey Theatre School, before moving to London. She was previously married to actor Frank Singuineau from 1954 until 1963.

She is survived by her second husband, Jack Jenner, brother John, and an extended family. She passed away after a long illness in Co Kilkenny on New Year’s Eve. Her funeral takes place in St Colmcille’s Church, Inistioge on Thursday.

In this little clip, below, you can see Doreen as Concepta Riley when she walks through the door at the Rovers just in time to help out Annie Walker behind the bar during their busy Christmas rush.