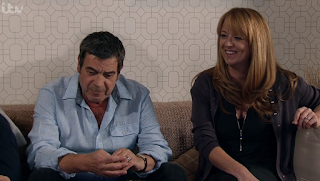 (This post was originally posted by Scott Willison on the Coronation Street Blog in January 2018, reposted to this blog with permission.)


You don't marry a person, you marry a family.  Poor Jenny Bradley.  All she wanted was a quiet life with her new husband, sipping pina coladas on a lounger in Alicante and occasionally popping into the karaoke bar for a performance of her signature tune, What I Did For Love.  Instead she's constantly being dragged into Kate and Aidan's endless dramas - and now another fruit of his loins has turned up.  It's no wonder her veneer of politeness began to crack at Carla's birthday dinner.  Still, it meant we got a bushel of Amazing Jenny Bradley Faces, so her loss is our gain. 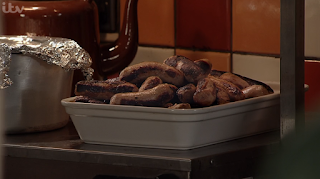 Always keep a sausage handy.  Some establishments might cook the meals as ordered; some might have a stash of frozen food that gets warmed up.  At Roy's Rolls, the convention is to fry dozens of sausages first thing then leave them sitting around, uncovered, on the side, on the off-chance that someone fancies a banger.  That stack of rancid sangers turning cold in their own fat caused membership of Toyah's Vegan Discussion Group to double in a day. 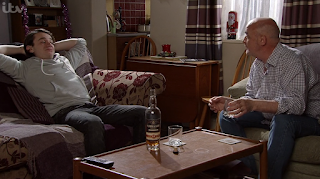 Everyone wants to get Seb drunk.  In one episode, Gary is buying Seb a hotpot, purely so he could get an underage lad a pint of beer.  In the next, Phelan is forcing glass after glass of whiskey down his throat, just to get him paralytic.  Both times, the adult was doing it purely so they could take advantage of the naive teenager.  Careful Seb; next thing you know you'll be waking up handcuffed to a headboard wondering where your pants are.  Trust me, I've been there. 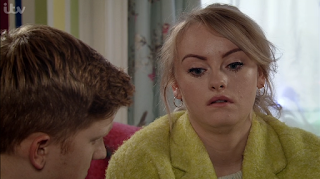 Second best is good enough.  The interminable Sinead-Chesney-Daniel love triangle rumbles on, whether we like it or not.  Even Daniel got sick of the entire storyline this week and tried to put an end to it, but Chesney and Sinead instead bleated out a whole load of truths for what seemed like weeks and decided at the end of it they may as well get married anyway because they've paid for the cake.  Nothing says true love like a woman dumping you, going off to another man, then coming back to you because the second bloke isn't interested any more.  Let's hope Sinead and Chesney work out what happened to Luke so Phelan can drop them into a nearby reservoir. 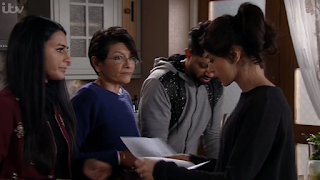 It's hard to do a racism storyline before the watershed.  The note shoved under Alya's door was shocking and revolting apparently, but we'll never know what it said because they can't use that kind of language before nine o'clock.  It meant that we got several scenes of the Nazir family staring at a piece of paper, horrified, without ever learning its contents.  Personally I doubt it was racist at all; I think Sean did a crudely drawn nude of Norris as part of his campaign to annoy every single resident of the Street, and that's a hate crime in anyone's book.

@merseytart also does star jumps while naked, but he has the good manners to close the curtains when the window cleaner comes round.